The Rivers State police over the weekend, arrested an optical doctor for allegedly raping a daughter of his patient who is currently on admission in the hospital.

The accused person, who is working with a private hospital (name withheld) located at Azikiwe Street in Port Harcourt metropolis, was said to have sent his victim to buy a sachet water, pretending to be tasty.

According to the sources, when the girl  reportedly returned from the errand, unknown to her, the amorous doctor (name withheld) who had already hatched his evil plan, held her captive and took her to one of the rooms in the hospital and allegedly raped her.

The Tide gathered that the little girl reported the act to her mother who was in admission at the hospital as at the time of the incident. Following the alleged child abuse, the victim’s mother reported the incident to Iloabuchi Police Station which arrested the optician.

It was also learnt that the optical doctor had been indulging in such immoral act with both staff and female patients in the hospital.

According to the nurse, the doctor may have committed the act because his  problem had been how to sleep with women.

One of his colleagues and a medical doctor with the hospital confirmed the arrest but declined to speak further on the matter, claiming that he was not in a position to do so.

When our reporter visited the hospital, patients and staff were seen in  groups discussing the fate of the doctor, describing the act as unprofessional of a man who should be a crusader of moral excellence.

Efforts to speak with the accused and the victim were not successful as they were said to have been invited by the Iloabuchi police station for further interrogation on the matter. 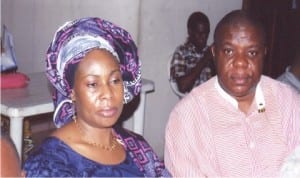