English clubside, Chelsea last night sent shockwaves across Camp Nou, Spain, Europe and indeed the football world as they outwitted Barcelona in the semi-final of the Champions League.

The Blues playing with 10 men against all odds came back twice to hold the mighty Barcelona 2-2 at Nou Camp in the second leg of the semi final to claim the final ticket 3-2 aggregate.

After doing all the playing in the first leg and lost 1-0 at the Stamford Bridge, most analysts expected the all conquering Barca to come out smoking to overwhelm the Blues.

But just as in the first leg, Chelsea came with the proverbial London bus and parked it across their vital area. For the greater part of the match, about 21 players camped in Chelsea’s half, as Barca persistently probed for goals and the English team defended stoutly.

However, Barcelona opened scoring midway in the first half, when Sergio Busquets found space to beat Petr Cech.

However, while Barca went for the kill, the table turned as Chelsea’s only positive counter attack resulted in a precious away goal by Ramires.

In desperation, Barca became relentless as waves after waves of pressure were effectively doused by 10-man Chelsea.

A chance to go 3-1 up from the spot by Barcelona was wasted by Lionel Messi when he hit the cross bar, and desperation turned to panic as the clock ticked away.

Few minutes to the end, home boy, Fernando Torres paid back some of the $50m paid for his services as he secured the final’s ticket with an excellent break away goal.

The 2-3 aggregate loss last night marked the third consecutive time Barcelona would fall in the past seven days, and a hint that their days of invincibility may be behind them now.

It was a result that owed a lot to a moment of guile from Ramires but more to a display of guts from the Brazilian and his team-mates after Terry’s needless dismissal for driving a knee into the back of Alexis Sanchez off the ball.

However, Chelsea have already shown during this Champions League campaign that they are made of stern stuff and somehow they raised themselves to the challenge of the championship. 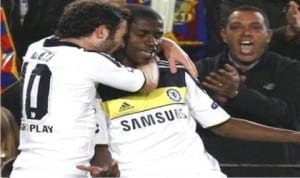 Chelsea’s players, Mata and Ramires celebrating their victory over Barca, last night at the Camp Nou

Doctor In Police Net For Rape