Worried over the spate of uncompleted and abandoned projects by the Niger Delta Development Commission(NDDC), the new Managing Director of the federal interventionist agency, Dr. Chris Oboh, says there are plans to review projects in tandem with the region’s master plan.

Dr Chris made this known while speaking at a media interactive programme organised by Silverbird Communications in Port Harcourt at the weekend.

The NDDC Managing Director said,’’ much of the NDDC masterplan has derailed, “ stating that,’’ a lot of projects are not in line with the masterplan because of pressure”.

Against this backdrop, he revealed that the commission has set up a project monitoring,execution panel made up of journalists and consultants to review subsisting projects and confirm their sustainability.

‘’ We are trying to entrench a process that is transparent and sustainable in NDDC” he added.

Dr. Oboh stated that on assumption of office last year November, the agency embarked upon evaluating some of the contracts awarded by the past administrations, noting that some of the projects awarded were overvalued and re-awarded.

However, with the current challenge, he assured that the commission was geared at completing old projects to reduce waste, even as he called on contractors handling some of the projects to return to site or face sanctions.

Meanwhile, the NDDC boss has denied allegations that the agency were sponsoring miscreants and machineries in the guise of repentant militants.

He noted that the era of sharing money to miscreant youths who besiege the headquarters’ office of the agency was over. He remarked that the commission was poised to ensure that only law abiding and genuine repentant militants were given scholarships and training.

Dr Oboh disagreed with claims that the commission was giving preference to only ex-militants than law abiding youths, pointing out  that,’’so far we have trained over 500 youths in various trades and skills. 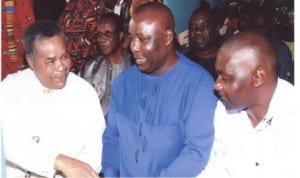