Members of the Rivers House of Assembly have called for the revitalisation of the Ahoada Industrial Estate to boost industrialisation in the State.

The legislators made the call in a motion at the plenary session on Wednesday in Port Harcourt.

Ahoada Industrial Estate in Ahoada West Local Government Area was established during the military era but has since been abandoned by successive administrations in the state.

Mr Chigbo Eligwe urged the House to ensure that the state government revived the abandoned estate to generate revenue and create employment for the youths in Ahoada and Rivers in general.

Mr Augustine Ngo, representing Abua/Odual constituency, said that the revival of the Ahoada Industrial Estate would help to decongest the city of Port Harcourt.

Supporting the motion, Ngo said that it would draw the attention of the state government to the huge business opportunities that abound in Ahoada West constituency.

Martins Amawhule, representing Obio/Akpo constituency, while supporting the motion, urged the House to liaise with the State government to ensure the revitalisation of the moribund company.

He called on the House to refer the issue to the relevant committees to properly assess the level of decadence for further action by the assembly.

Describing the motion as a welcome development, the leader of the House, Mr Chidi Lloyd, said that if the estate was revived, businesses without permanent locations could use the place.

The Speaker of the Assembly, Mr Otelemaba Amachree, while commending the members for a fruitful deliberation, said the Committee on Commerce and Industry should do more investigations on the estate.

He told the committee to report its findings to the House in two weeks time. 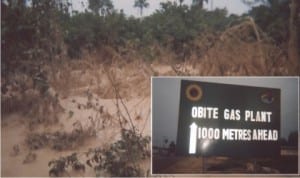 One of the sites of the gas leakage/explosion. Inset: Obita gas plant