The Rivers State Commissioner for Sports, Mr Fred Igwe,  says the state is preparing to defend its title at the 18th National Sports Festival scheduled for Lagos in November this year.

Rivers state hosted and won the 17th edition of the Games in July last year with 135 gold, 79 silver and 85 bronze having a total medal haul of 299.

Igwe told newsmen in Port Harcourt on Tuesday that as defending champions, Team Rivers would soon commence preparations for the festival.

He said the state was aware that other rivals were eager to topple it at the competition and that arrangements were on to ensure a good outing at the Lagos Games, tagged “Eko 2012’’.

The commissioner said the state was not lagging behind in preparations for the Games.

“Camping will commence soon. I think we are not lagging behind by way of preparations.

“So, camping will commence soon. But, all other things like the recruitment of athletes and all matters associated there with, including approbatory payments have been effected. So, we are on course’’

Igwe said the state would ensure that issues affecting the welfare of athletes were given priority to motivate them to achieve good results at the Lagos Games.

He said Gov. Chibuike Amaechi loves sports and rewarded athletes that did the state proud during the 17th edition of the festival hosted by the state last year.

Igwe said the governor was prepared to do more for the athletes if they successfully defend the title in Lagos. 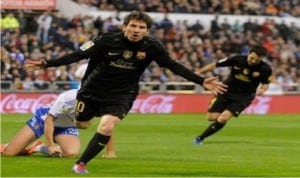 Lionel Messi the threat Chelsea must try to stop, today