Nigeria’s President Goodluck Jonathan yesterday urged multinational operators of the oil and gas sub-sector to adhere religiously to the increasing national demands of local content development in all their activities.

The president handed down the directive while unveiling the USAN two-million barrel capacity Floating Production, Storage and Off-loading (FPSO) vessel, a deepwater oil production facility located about 100km off the coast, South-East of Port Harcourt.

With in-water depths ranging from 750m to 850m, the USAN FPSO project, is the brain-child of Total E&P Nigeria Limited, the company’s second such deep water facility in the country, after Akpo.

While voicing satisfaction over the timely delivery of the project and doing so within original budget estimates, President Jonathan hoped that multinational concerns would devote greater commitment to local content development as exemplified in the USAN initiative.

Earlier, President Jonathan and other top government functionaries were conducted on a guided tour of the facility by the FPSO Off-shore Installed Manager (OIM), Mr Eragbae Aikhoje after the traditional safety briefing.

In his vote of thanks, Total’s Chief Executive Officer (CEO), Mr Christoph de Margerie described USAN as a perfect example of the group’s ability to manage large complex projects and to bring them on stream in time and close to budget. “Indeed, the project was not only on time but ahead of schedule”, he said.

The tour of the FPSO and eventual unveiling of the commemorative plaque by President Jonathan was preceded by an inaugural dinner  at the congress hall of Transcorp Hilton, Abuja on Monday.

In a pre-inaugural video presentation of the project, the Deputy Managing Director (DMD), Deepwater District, Mr Charles Ngoka traced the project delivery to the discovery of the field in 2002 in block OPL 222 (now OML 138)

The development of the USAN field, according to him, involves 42 wells (23 production wells, nine water and 10 gas injector wells) connected to a two-million barred capacity Floating Production, Storage and Offloading (FPSO) vessel by subsea lines and risers with a design production capacity of 180,000bpd.

The FPSO construction, he further said began in 2008 and was completed late 2011 by Hyundia Heavy Industries.

Measuring 320m long and 61m wide, the height of the vessel is 56m to the heli-deck and 150m to the top of flare platform, while the contract work includes engineering, construction, installation and pre-commissioning facilities.

According to Ngoka, fabrications and offshore installation were carried out locally in Nigeria, mainly by Saipem at its SCNL yard, Rumuolumeni, Port Harcourt.

According to him, the USAN deepwater development project has advanced Nigeria’s local content with more than 11 million man-hours of engineering and fabrication performed in the country.

The Tide gathered that the USAN FPSO arrived the project site July 31, last year after three months of being lowed from Ulsan, South Korea and started production February 24, this year, while the production plateau will be determined in accordance to the start up.

Nigerian Local Content input, The Tide further gathered involved 7,500 tonnes of FPSO topsides and 15 pressure vessels in Nigerdock yard, Lagos; entire Flowlines, Riser System and Export Buoy in Saipem yard, Port Harcourt; 8 sub-sea manifolds, 42 permanent guide bases and assembly of 12xmas trees in Cameron and GlobalStar yards in Onne and Warri and nearly half of the 7,500 tonnes of the FPSO mudules fabricated in Nigeria have been integrated in the country. 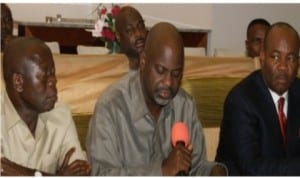