The Rivers State Government has muted plans to establish new fire stations at the grassroot areas of the state.

Commissioner for Special Duties, Hon. Emeka Wogu, gave the hint in a chat with newsmen at the weekend in Port Harcourt, as he assured of plans by government to revive the fire stations at Rumuodomaya, Ahoada, Degema and Borokiri in Port Harcourt.

Hon. Wogu said,’’for now the only functional station is the headquarters, but we are making concerted efforts to complete the fire stations at Rumuodomaya, Degema, Ahoada and the one at Borokiri which is almost completed ’’.

The Special Duties Commissioner explained that the measure has become imperative to tackle emergencies at the local areas, especially with the rising spate of fire disasters linked to petroleum products.

He also divulged plans by the Ministry to establish a fire fighting corps at the Rivers State secretariat complex.

This, he said, was aimed at ensuring safety of lives and properties in the secretariat and other government buildings in the state.’’ The Ministry is working on plans to train staffers from the various Ministries as Emergency Fire Wardens’’, he noted.

Such officials, he further explained, would be selected from each of the Ministries,’’ we have written letters to Ministries to nominate at least 10-20 staffers in the Secretariat and other public buildings and they would be trained as emergency fire wardens’’, he emphasized.

Hon. Wogu said plans are also in top gear to revitalize the State Fire Service Department to meet the current fire outbreak challenge.’’ Everyday we get four to five distress calls on the average,’’ and we know that it is the social responsibility of the government to protect lives and property and to respond to distress calls to citizens”.

Meanwhile, The Commissioner stated that a bill to promote emergency regulation is in the House of Assembly, adding that  a stakeholders forum will be convened to chart a fresh course in the sub-sector.

Hon. Wogu added,’ emergency is not only fire, we are lucky in this part of the country that we don’t have incessant building collapse…there are also security emergencies so we want to coordinate security agencies in emergency management in the state.’’ 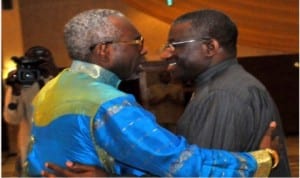 Awaiting A Miracle …The Fairy Dream of a New World