Members of the Petroleum and Natural Gas Senior Staff Association of Nigeria (PENGASSAN), are set to commence a three-day warning strike on Monday.

A press statement made available to The Tide by the Union National Industrial Relations Officer, Comrade Chika Onuegbu said the nationwide warning strike will commence on April 16, 2012.

Comrade Onuegbu stated that the national secretariat of the union had duly notified all the relevant authorities and stakeholders of the impending strike.

Comrade Onuegbu further said that officials of the union were willing and ready for a meaningful dialogue with government to address the issues as presented by PENGASSAN to avert the total shutdown of the oil and gas industry operations.

He stated that in response to the union’s strike notification, the Federal Government through the Minister of Labour and Productivity. Chief Emeka Wogu invited the union’s officials to a stakeholders meeting yesterday in Abuja in a bid to avert the strike.

Meanwhile, other stakeholders had expressed worries over frequent industrial actions in the oil and gas  sector.

According to Engr. Samuel Peter, a stakeholder in the sector, the frequent industrial strikes in the oil and gas industry impact negatively on optimal operations of the sector.

He advocated dialogue among the various stakeholders to stabilise the sector for optimal operations and benefit to Nigeria. 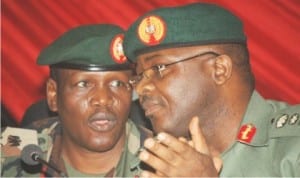