The state Commissioner of Police, Mohammed A. Indabawa disclosed this during a press briefing held at the Officers Mess in Port Harcourt, Wednesday.

According to the state police boss, the suspect, Jim Zarcus had  a little quarriel with his girl friend and he killed her and buried her in his room.

He stated that the incident occurred on April 1,2012, adding that the suspect was arrested on Wednesday, April 10 following a tip-off from members of the public.

The state police boss further stated that the suspect, Jim Zarcus confessed to the crime during interrogation, adding that investigations on the matter were on-going.

“We got the information that the suspect killed and buried his girl friend at Elechi  Beach, we have arrested him, he also confessed. The body of the late girl friend, Peace Martins has also been exhumed,” he stated, adding that the family of the deceased was yet to be contacted by the police.

Meanwhile, the state Commissioner of Police, Mohamed A Indabawa, says the police has arrested four out of the seven suspects that allegedly raped a fourteen year old girl in Port Harcourt.

He stated that the girl had been treated at Braithwaite Memorial Specialist Hospital (BMSH), Port Harcourt, assuring that the fleeing suspects would be arrested soon.

The commissioner also said that the command had between March and April arrested 61 armed robbery suspects and foiled several armed robbery attempts in the state.

He said that 15 of the robbers were fatally wounded in the course of the arrest.

Indabawa disclosed that 25 kidnap suspects were arrested during the period with two of them fatally wounded.

The commissioner said the kidnappers included those who abducted a 68-year-old woman from Egbeada and collected N500, 000 ransom.

He also said 20 suspected cultists were arrested in the state while 15 stolen vehicles and motorcycles were recovered in the state.

The commissioner disclosed the police had smashed a forgery syndicate which specialised in forging police vehicle purchase clearance certificates, tinted glass permits and other public documents.

He said a female staff of the state Board of Internal Revenue had been arrested for the forgery and over 20 different fake documents recovered from her, adding that she had been charged to court.

“I will relentlessly pursue with vigour the reduction of crimes and criminality in the state,” he said.

According to him, the command would create an atmosphere of peace that would enable members of the public to go about their normal businesses.

Meanwhile, three suspects who killed two children in the bid to abduct the mother of a member of the Bayelsa State House of Assembly, Hon. Abraham Igonbere, have been arrested by the police.

The killing of the children took place in Sagana in Brass Local Government Area of Bayelsa State on February 17, 2012.

But the Commissioner, Bayelsa State Police Command, Chris Olakpe, said the three men who carried out the killing had been arrested.

Olakpe, who spoke with newsmen in Yenagoa, the Bayelsa State capital, on Wednesday, said the men were arrested during raids on different black spots in the state.

He said, “the three-member gang went into Sagana, kidnapped the mother of a lawmaker and in the wake of the kidnap, two little children, who were crying, were shot dead by the gang.

“The suspects have confessed their involvement in criminal kidnapping and murder of two innocent children.” 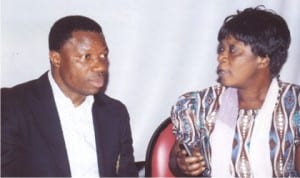 Rivers State Commissioner for Budget and Economic Planning, Hon Gogo Charles Levi, representing Secretary to the State Government, with Chairman, Rivers State Pension Board, Mrs Edna Alikor, during a one-day sensitisation/ enlightenment on the Contributory Pension Scheme organised by the pension board in Port Harcourt, yesterday.

Awaiting A Miracle …The Fairy Dream of a New World