Manchester United will continue the push towards their 20th top flight title today when they journey to DW Stadium to take on Wigan.

United have been helped by the influence of veteran Paul Scholes, who came out of retirement in January to lend a hand to a depleted midfield.

The 37-year-old – who scored with a sensational long-range drive in the QPR match – has been instrumental in United’s title push, with the club claiming 34 of a possible 36 points since he returned to the fold.

Wigan are second from the bottom of the table on 28 points, the same as the two teams directly above them – Blackburn and QPR.

With a tough run home against United, Arsenal and Newcastle among others, points are at a premium for Wigan, who suffered their first loss in five matches with a 2-1 defeat to Chelsea at Stamford Bridge at the weekend.

But they will need a dramatic turnaround in fortunes if they are to claim a point against United – they have never beaten Ferguson’s side in the Premier League, losing all 13 matches they have played in the competition, conceding 42 goals and scoring just four.

Wigan’s squad is in good health for this stage of the campaign, with only Hugo Rodallega in doubt with a knee complaint.

But at this stage of proceedings, even a lengthy injury list does not seem to be able to derail the champions’ title defence.

With Mario Balotelli suspended, thanks to his red card from Sunday’s 1-0 loss to Arsenal, Mancini will have to reform his attacking structure.

But with Yaya Toure and David Silva doubtful starters due to injury, it will not be easy for City’s boss.

Toure limped off against Arsenal with a knee injury and Silva missed out altogether, also with a knee problem.

For Mancini, the solution may be Carlos Tevez.

City have won just once in their past five Premier League games and desperately need to get back on track against West Brom.

Roy Hodgson’s side ended a four-game winless streak on Saturday, triumphing 3-0 over Blackburn.

That win included a welcome clean sheet as well, after Hodgson’s men conceded eight goals in their four games without victory.

Defence has been a problem for West Brom this season with just seven clean sheets managed.

With safety pretty much secured, Hodgson’s side could provide City with the easy win they so desperately need.

Substiquently, Arsenal striker Robin Van Persie will hope to break a streak of four games without a goal when his side take on Wolverhampton.

Van Persie has not scored in 435 minutes of football with his last goal coming in Arsenal’s 2-1 victory over Newcastle on March 12.

His goal against Newcastle was his 32nd for the season in just 34 games and although his goal-per-game ratio has worsened since, Van Persie is still one of the best-performed strikers in Europe this season.

While Van Persie will be expected to break his scoring drought sooner rather than later, Arsenal manager Arsene Wenger will be happy with how the rest of his squad have shouldered the goal-scoring burden.

Arsenal have won three and lost one of their past four games, hitting the back of the net seven times since Van Persie’s last goal.

Theo Walcott, Thomas Vermaelen and Mikel Arteta have all scored twice in that period.

Wenger will have to plug a hole in his defence for the trip to Wolves with Laurent Koscielny suspended after the French defender picked up his 10th yellow card of the season in Arsenal’s 1-0 victory over Manchester City on Saturday.

That win was Arsenal’s seventh in eight Premier League matches and puts them on 61 points, two points clear of fourth-placed Tottenham with six games to go in the season. 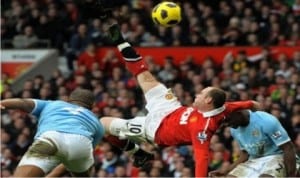