The quest of Nigeria’s Finance Minister, Dr Ngozi Okonjo-Iweala to lead the World Bank received a boost Wednesday with her endorsement by a group of former World Bank officials .

In an open letter, 39 former managers and economists called on members of the Bank’s executive board to make their decision on merit, when the board considers more than one candidate for the job for the first time.

“We believe that Mrs. Okonjo-Iweala has outstanding qualifications across the full range of relevant criteria,” they said.

Okonjo-Iweala, a former World Bank managing director, and Jose Antonio Ocampo, a former Finance Minister of Colombia, are competing with the US nominee Jim Yong Kim, a public health expert and president of Dartmouth College.

Under a tacit agreement, the US picks the World Bank president, always an American, and Europe puts a European at the helm of the International Monetary Fund, the Bank’s sister institution.

The World Bank plans to select the successor to outgoing President Robert Zoellick by April 20, the start of its spring meetings with the IMF.

Writing in their personal capacity ahead of the candidate interviews next week, the ex-bank officials said, “we care too much for the institution and for its historic development mission not to speak up.”

The letter was signed by a number of Europeans, including Francois Bourguignon, who was the development lender’s chief economist in 2003-2007, as well as Barbara Kafka, an American who served over 33 years at the bank in a range of posts.

Okonjo-Iweala “would bring the combination of her experience as finance and foreign minister of a large and complex African country with her wide experience of working at all levels of the Bank’s hierarchy in different parts of the world, from agricultural economist to managing director,” the letter read.

While the other two candidates also have strong qualifications, “she would be the outstanding World Bank president the times call for,” it added.

Ocampo, an Economics professor at Columbia University in New York who has written extensively on growth and development issues, is being endorsed by a global cross-section of economists.

An internet petition supporting his candidacy, on economist Kevin Gallagher’s Triple Crisis blog had more than a hundred signatures from academic economists, former central bank chiefs and the heads of international agencies.

Ocampo outlined his vision for “a brave new World Bank,” which he said could fight poverty “not only with economic growth and job creation, but also by addressing inequalities that have risen in most countries in recent decades, and by eradicating all forms of gender inequality.”

The favoured US candidate for the post, Kim, is supported by Canada, Japan and South Korea, where he was born.

Meanwhile, the President and Chairman in Council of the Nigeria Institute of Management (NIM), Dr Michael Olawale-Cole,  has canvassed support for Nigeria’s candidate for World Bank presidency, Dr Ngozi Okonjo-Iweala.

Olawale-Cole, who featured at a forum yesterday in Abuja, however, expressed regret, that Nigeria would miss Okonjo-Iweala’s proficiency, if she got the job.

He expressed fears that international politics could affect her performance, adding that the World Bank presidency position could be beneficial to Nigeria, if Okonjo-Iweala won it.

“We are very supportive of her going; on the side, we are not happy because we’ll be losing her in the work place here in Nigeria and her contributions.

“Because going by antecedents, she has some passion for this country; so, we’ll be losing her if she gets the job; but if she can get it, it will be a good sales point for Nigeria.

“My anxiety is that a couple of things might not work in her favour, but if she gets it, we will be very happy.’’

Okonjo-Iweala, Nigeria’s Finance Minister and Coordinating Minister of the Economy recently joined the race for the World Bank presidency alongside Dr. Jim Yong Kim, a South Korean, and Jose Ocampo of Colombia. 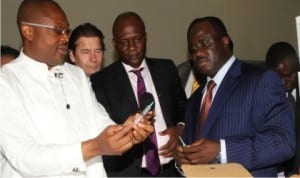 WHO Certifies Rivers-Made Syringes …As Amaechi Tasks NAFDAC On Patronage