The proposed 7th train of the Nigeria Liquefied Natural Gas Limited(NLNG) in Bonny, Rivers State, is expected to provide over 13,000 jobs, the Senate Committee on Gas has said.

Chairman of the committee, Senator Ngozi Nwaogu made the disclosure in a chat with newsmen  after  members of the Senate body paid a courtesy visit to Governor Chibuike Amaechi on Tuesday in Port Harcourt.

She disclosed that the committee would press for the commencement of the project, which has suffered delay over the years.

“As we go back, the committee will look into areas where we will intervene with the Executive arm on why they have not provided the necessary approval for the NLNG to go speedily into the establishment of the seventh train,” she said.

The Senator from Abia State lamented that Nigeria’s market share in the exportation of gas has continued to dwindle over the years.

She noted that Algeria, Angola and Indonesia are fast dominating the market, leaving Nigeria with only a paltry eight per cent share of the market.

However, Senator Nwaogu expressed hope that if the NLNG seventh train is built, it will consolidate Nigeria’s gas export and meet local demands as well, stressing that, “the seventh train has bigger tonnage, will help boost exportation, and of course, increase revenue for Nigeria”.

The Senate gas committee chairman  further lamented the sudden decline of gas to meet local demands, saying “our visit has built up our knowledge of the challenges of the industry.

Currently local provision of LPG gas is put at 150 metric tonnes and this is low compared to the one exported “.

While deploring the poor provision of LPG to meet local demand, Senator Nwaogu blamed the distribution and marketing network, saying,’’ one thing we insisted is why can’t they establish a gas depot here in Port Harcourt so these products can be easily accessed in order to reduce the cost of transportation and invariably the cost of products.”

Senator Nwaogu equally deplored the gas flaring activities in the country, observing that aside its environmental hazards, it also affects utilization of the product.

She argued that if gas flaring is reduced, it will boost gas availability, emphasising that, “if the NLNG is assisted to put up the seventh train, it will further reduce the gas flared.”

She blamed the problem on  lack of adequate infrastructure and poor penalties on oil firms to discourage them from doing so. 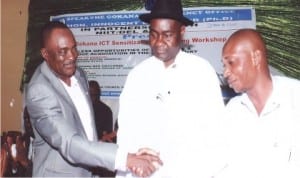 Member of Rivers State House of Assembly, Hon Innocent Barikor (right) in a handshake with Hon Belema Okpokiri who represented the Speaker of the House, Rt Hon Otelemeba Amachree, during the inauguration of Hon Barikor’s Constituency Office in Gokoka, while the chairman of the occasion, Senator Magnus Abe watches. Photo: Chris Monyanaga