After the first leg encounter at San Siro last week ended scoreless, the tie was delicately poised for the two sides, who had tangoed in over two legs in the group stages.

But two penalty kicks awarded by the referee saw Lionel Messi score in the 11th and 41st minutes to ensure that Barcelona ended the first half on top. Milan had pulled level after the first penalty when Antonio Nocerino latched on to a through ball to best Victor Valdes.

Milan’s equalizer briefly pushed the initiative the Italian way until the second spot kick and an Andreas Iniesta’s second half goal sealed the ticket for Barcelona.

Also, Messi’s two goals ensured that he broke the champions League goal record in a single edition, which had stood on 12 goals.

The Argentine now has 14 goals to his name this term.

At the Allianz-Arena in Germany, Bayern Munich finished off Olympic Marseille, 4-0 aggregate to advance and set up a potential semi final clash with Real Madrid.

Ivica Olic scored a brace to give the  German side a 2-0 home victory, the same margin they achieved in France last week.

While Bayern looks up to the semi final date with Real, Barca awaits a potential date with English side, Chelsea. 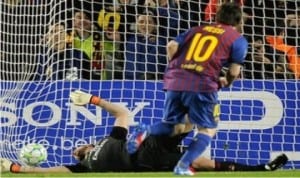