The proposed industrial villages to be sited in Etche Local Government Area of Rivers State will be ready in the next 24 months.

Executive Director of the Rivers State Bureau for Public/Private Partnership (RBPPP), Mrs. Anita Laz Nwokeafor gave the hint on Wednesday in a chat with newsmen in Port Harcourt.

Mrs. Nwokeafor disclosed that plans were now at advanced stage since they were public/privately driven, but said all agreements with partners had to be sealed before the project will commence.

In her words,” this is one project I can tell you will change peoples lives because we will be generating over a thousand direct employment in those villages”.

The Rivers BPPP boss hinted that the project will also teach the rural populace for the first time techniques in mechanised farming,” so in one project we will be able to address infrastructure, unemployment and create a new economy for the state”, she added.

She stated that the major fulcrum of the State PPP vision was hinged on the need to create jobs, manpower development and exploitation of the abundant natural resources of the state,” our focus is also on the future. In a couple of years when our children are able to graduate they will have jobs.”

Against this backdrop, she stated that the State PPP focuses on three key areas of agriculture, education and power generation.

Commenting further on what the board had done to fast-track the state power generation programme, Mrs. Nwokeafor disclosed that a partnership scheme was now underway with a foreign firm for the local manufacturing of transformers and pre-paid metres.

“ Once the state is able to generate enough power,” she said, “ then it will consider selling excess power to other states and gain revenue from there.”

She also stated of the bureau’s plan to collaborate with the Greater Port Harcourt City Development Authority(GPCDA) in the bid to decentralise urban development in the state.

According to her, the bureau aims at collaborating in the area of housing development by wooing private investors,” our people need to be able to live in more decent houses and planned communities, and so we believe there is a need for us to drive growth away from the old city.”

Meanwhile, the Rivers State BPPP boss has ruled out the possibility of having abandoned projects from those initiated through public private partnership.

Mrs. Nwokeafor said the issue of project abandonment did not arise since risks were borne by the government and the private partners.

“All the projects we intend to close this year and we have less than 20 percent equity…so abandonment is not the issue because our risks are minimal”.

Besides, she argued that so far, most of the projects endorsed go through intense planning process and ,” we conduct diligence on our partners to ensure that they have the technical ability to do the projects.” 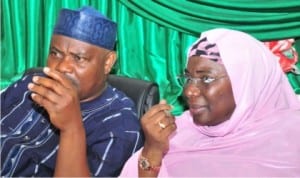 Minister of Education, Prof. Ruquayyatu Rufa'i (right), with the Minister of State, Chief Nyesom Wike, at the inauguration of the presidential visitation panels into the affairs of Federal Polytechnics and Colleges of Education in Abuja, yesterday.