The Rivers State Government, says it will resume absorption of nurses from the State School of Nursing to the State Health Service.

Feyii said the policy had become imperative to boost the state medical manpower, as the government places high premium on healthcare delivery proven with the huge capital expenditure allotted to the sector.

“Once somebody enters into the State Nursing School, he or she automatically becomes a staff of the Rivers State Government,” he said.

“In fact, between health and education, it would be difficult to place one above the other…We are also very mindful that without good health, you cannot also go to study.”

Meanwhile, the SSG has enjoined healthcare workers posted to rural areas to be diligent to duty, as government was aware that many of them stay away from duty and such attitude, according to him, would frustrate government’s health scheme.

Feyii observed that besides doctors, other members of the medical workforce were crucial to effective healthcare delivery. “When you are talking of health, every member of the team is very important, not only doctors.”

Earlier in her speech, Chairperson of the Rivers State MedicalandHealth Workers Union of Nigeria (MHWUN), Comrade Beatrice Itubo said the programme was a culmination of a decision reached at the NEC meeting of the body last year at Owerri.

As the first in the state, Comrade Itubo said the celebration was geared at bringing to the fore the challenges faced by medical workers in the state and how to tackle them.

She declared, “some think it’s a doctor and nurse affair, others think that the other professionals also involved in healthcare delivery services are of little importance. It is noteworthy that health delivery is a team work”.

She stressed that the theme of the programme, “Primary Healthcare Development As Platform for Attaining Universal Access to Quality Healthcare Services in Nigeria,” was appropriate, considering the role of primary healthcare in the overall health care service delivery in the country.

Comrade Itubo urged the government to extend the gesture shown to nurses to other health workers, as it would improve the health indices of the state. 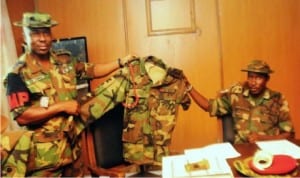