Chelsea Football club and Real Madrid last night played themselves into good positions in the quarter finals of the European Champions League and potential semi final tickets with away victories in Portugal and Cyprus, respectively.

Chelsea, the only remaining English team in the competition overcame Benfica 1-0, courtesy of a 75 minutes Salomon Kalou goal, while Real Madrid produced an efficient second half performance to record an emphatic 3-0 victory over Apoel Nicosia.

In Portugal, it was an exquisite performance by Chelsea, who exhibited a well drilled cohesive show to frustrate Benfica and deny them clear chances on goal.

As Benfica struggled to create an opening after a barren first half, Chelsea exploited a slack defending by the Portuguese club’s defence and Kalou punished them after a fine work from the flank by Fernando Torres.

Chelsea are now in the driving seat as they are favourities to finish off Benfica at the Stamford Bridge in the return leg.

For Real Madrid, it was an expected result as they ran out 3-0 winners against APOEL, the first club from Cyprus to reach the quarter finals stage of the Champions League.

Indeed, APOEL produced a performance one can be proud of after keeping star-studded Real at bay for the whole of first half.

Despite creating several opportunities and APOEL’s inability to muster a shot on goal, Real’s frustration continued until the 74th minute when Karim Benzema opened scores.

Substitute, Kaka made it two before Benzema who had earlier missed a sitter in the game scored his second to give Madrid a comfortable first leg victory. 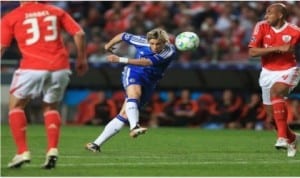