Worried over the delayed implementation of the United Nations Environmental Programme (UNEP) Report on Ogoni land, the Movement for the Survival of Ogoni People (MOSOP), says it would begin fresh dialogue with the Federal Government over the matter.

Provisional Chairman of MOSOP, Prof. Ben Naanen made the plans public during a media interactive programme organised by Silverbird Communications  at the weekend in Port Harcourt.

He stated that the dialogue had become imperative to calm the tensed situation in Ogoni caused by the delay so that we can kick-start the clean up process as quickly as possible.”

For the meantime, he assured that MOSOP would continue to appeal to Ogoni youths since the group believes in a non-violent means of agitating for its rights.

According to him, “already the issue is receiving international attention. As I speak to you now, all our affiliates across the world and other stakeholders are mobilising just in case the Federal Government refuses to act as quickly as possible.”

Prof Naanen appealed to the Federal Government to act quickly in order to prevent the situation from snowballing into crisis level.

He used the medium to debunk claims that the group was beset with internal wrangling,” I can assure you that there is no division in Ogoni over these issues…there is consensus in the body and the leadership of Ogoni people is very clear”.

The university teacher argued that bunkering activities had subsided in Ogoni land as the people were well aware of the dangers and had taken the challenge to check the vice.

The MOSOP leader however blamed some security agents for encouraging bunkering in some parts of the state and proffered that the Federal Government needed to evolve economic schemes to discourage youths involved in the activity.” I have mentioned to the government several times that one way of combating bunkering is to provide alternative living for the people.”

Meanwhile, President of the Nigerian Environmental Society, Mr.Olu Andai Ogusu has warned on the consequences of delay in not tackling the oil pollution in Ogoni land.

Mr Ogusu who spoke at the media interactive forum organised by Silverbird Communications in Port Harcourt at the weekend said so far, the Federal Government had demonstrated lack of political will in tackling the Ogoni pollution.

He warned that if the underground pollution remained untackled, it would affect sources of drinking water in the area, noting that,” we should understand that ground water moves naturally and its spreading”.

“Since we have seasonal flooding, when water comes up all the farmlands would continue experiencing resurgence and would continue to develop impacts of oil pollution,” Ogusu remarked. 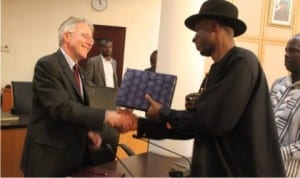