Nigeria has signed a $10 billion agreement with General Electric (GE) to build 10,000 megawatts power plants in the country.

The Minister of Power, Prof. Barth Nnaji, who signed the Memorandum of Understanding (MoU) with GE in London yesterday, said it provided for the construction of “series of power plants” in the country.

He explained that under the MoU, the GE would now be an equity participant.

“In the past, GE only supplied the equipment but now, they will be investing 10 to 15 percent in equity for every single project, the government will match them in such investment while the private sector will bring the balance.”

Nnaji told newsmen that the government would tap a small percentage of the National Pension Fund to finance some of the power projects.

“What the pension money is meant for is investment, but you invest in more secure instrument and this project is one of them,’’the our Correspondent quotes Nnaji as saying.

“Pension Fund is a secure fund so you cannot play around with people’s retirement money, so it is very important that everyone understand that the plan is not to just take the money and invest in project that are risky,’’ he added.

Nnaji explained further that infrastructure, including road tolls and transmission lines, were guaranteed income earners, “because charges accruing from them can fund the borrowed money from the pension fund”.

“There are not many projects that are more secure than the power plants; investment in this sector is constant because people must buy electricity, while government provides the guarantee,’’ the minister said.

Nigeria had signed a similar MoU with GE in 2009, but the minister insisted that the new arrangement was more detailed in specifics. 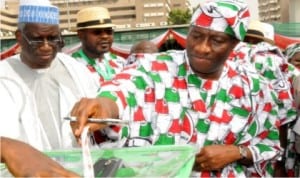