Nigeria loses about 5.5 billion dollars annually as a result of the swelling oil bunkering activities in the Niger Delta.

The figures were made public by the Ambassador of Netherlands in Nigeria, Mr. Bert Ronhaar at the Niger Delta Roundtable held yesterday in Port Harcourt.

According to Mr. Ronhaar the country loses about $15 million daily, which is estimated to be about $5.5billion yearly.

He lamented that this situation threatens the national economy since Nigeria’s major source of revenue remains crude oil production.

In addition, he noted that the Niger Delta is a major source of oil export to the western countries, especially the United States and Britain which sustain the Nigeria economy because, according to him 90 percent of its revenue comes from the region.

Mr. Ronhaar argued that safeguarding the environment has become crucial to sustaining development, saying “sustainable development is key to security, peace and stability as it requires combating corruption”.

The Netherland’s Ambassador disclosed that his country decided to organise the forum as a way of providing potential solutions to the Niger Delta problems through,” constructive dialogue to proffer solutions and confront challenges”.

In his remarks, Governor Chibuike Rotimi Amaechi blamed the increasing spate of bunkering in some parts of the Niger Delta to lack of employment and ignorance on the part of the youths.

Rt. Hon. Amaechi called for an economic empowerment scheme that would take into consideration the needs of the people and at the same time, allowing them to benefit from it.

“ What development does for the people is that it provides, employment”, Amaechi said. 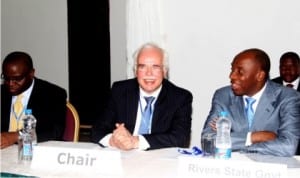