Chief Horsfall who stated this, Friday at the 5th annual award/lecture of the South South International Magazine in Port Harcourt alleged that resources from the Federal Government meant for the development of the area have gone into private pockets.

He frowned at the attitude of politicians from the area whom he accused of insensitivity to the struggle of the people for emancipation over time which culminated into the recognition of the region adding that the fight for recognition was for development of the region, and the people and not for self aggrandizement of some individuals.

According to him, “it took the region years and decades before it was recognised in the polity of the country. We made strident efforts to ensure that the region was recognised the first step we took was to form and establish the  minority movement in 1993 which later became the platform we used to agitate for the recognition of the South-South zone”..

Horsfall, a former boss of the National Security Organsation which metamorphosed into the State Security Service (SSS), noted that the minority movement was able to convince the late head of state, Maj- Gen Sani Abacha to recognize the region as a political zone.

He said the objective  was to ensure that the South South which contributes 95 per cent of the nation’s resources was not only developed but got its rightful place in the nation’s political affairs.

The former OMPADAC boss regretted that many years after that recognition, the zone still lacked the desired development due to some selfish politicians who have lost their integrity,  that we should join hands to establish integrity among the people.

Earlier, the publisher, Editor-in-Chief, the South-South International Magazine,Ovie Edomi urged the governors of  the zone to create an enabling environment for people to harvest in agriculture and tourism. 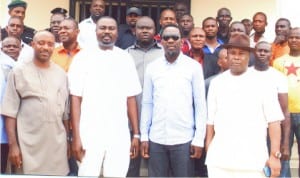 Members of Rivers State House of Assembly Committee on Ethics and Privileges, during a fact-finding mission on the Executive chairman of Ahoada East Local Government Area, Hon Cassidy Ikegbidi, recently.

Behind The Smoke Screen …Squinting Views Of The Northern Elite