Rivers State Government has set aside N30bn for the provision of uninterrupted power supply to the state by December 2012. Governor Chibuike Amaechi disclosed this yesterday, during the second Dissecting The Amaechi Administration Media Briefing Series, at Government House, Port Harcourt.

Represented by the Commissioner for Power, Hon. Augustine Nwokocha, Amaechi said what the Rivers State Government is doing to get 24 hours power supply this year is “to generate enough capacity, have a robust transmission infrastructure that will take the power to the people, to their neighourhood and then have a very solid distribution infrastructure that will take it to their routes, and so we are addressing these three things , power generation, transmission and distribution”.

He further said,  “unlike the previous system where they were all given to one person, here we have a total of 10 outfits doing different things to ensure that we deliver on time”.

“So, what we have done differently is that we have divided this work into smaller units that are deliverable, faster and better.  We have also focused on getting the quality of men that can deliver this work and deliver them well.

“We have Saipan Nigeria Limited to build a power substation.   We have Weltech doing a medium voltage substation.  We have selected people in that category, people who we believe can deliver based on their track record”.

The Power Commissioner said the state is “currently pursing rigorously the transmission aspect of the  power project.”

According to Hon. Nwokocha, the Amaechi administration has formed a committee of technocrats to deliver power to Rivers people, saying a reliable vendor has been found for power distribution in the state.

“We have identified a very veritable vendor with very reliable technology in distribution and transmission, Sunder Electrical of France and we have entered into a contract with them to supply all the materials that are required to stabilize power supply in the city of Port Harcourt and its environs”, he said.

“We have also awarded contracts to build substations that will reduce the length of our feeders that sometimes stretch as far as 40 or 50 kilometres though all manner of places; so we are creating substations that will impact shorter span of the city with the capacity to back feed if a substation has problem, from another one.  So that we will have reliable power supply”, he added.

He also announced that contracts for the acquisition of all parts and components of power substations have been awarded.

“Currently the contract for the acquisition of the parts and components required for this exercise have been awarded.  The contract for those who will do the implementation, the construction proper has been awarded; some of them in clusters of three substations, five contractors. We didn’t want to repeat the mistakes of the past where one person was doing generation, transmission and distribution. So, we have seven contractors doing the distribution substations each handling only three and then we have a contractor trying to remedy the lapses that are in the transmission backbone, and you have another contractor handling strictly generation”.

He also said that currently the state power projects is generating 466 megawatts with an additional 150 megawatts coming from PHCN, adding that said this capacity will increase to over 700 megawatts by the time the Phase 2 of the State Afam power project is completed next year. 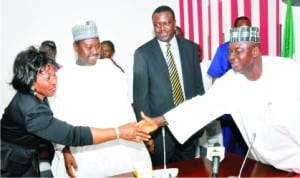