The South African government has rendered an unreserved apology to Nigeria.

This apology followed the federal government’s reciprocal action of deporting  South Africans for irregular travel documents with a promise to probe further activities of South African companies operating in Nigeria.

Minister of Foreign Affairs, Amb Olugbenga Ashiru had  on Wednesday vowed that the Federal Government would henceforth take such action against any country that took delight in ill-treating Nigerians.

The Tide gathered that 56 South Africans were  deported from Murtala Mohammed Airport, barely a day after 28 others were returned to that country, apparently in a reprisal action.

In an interaction session with the Senate Committee on Foreign Affairs, Ashiru said  ‘ this is the first time in all my career in foreign service where a supposedly friendly country would send 125 Nigerians back home on the flimsy allegations that they were caring fake Yellow Fever card, “(Vaccination Against Yellow Fever).

He had argued that even if these deportees were actually carrying fake cards, the worst the South African authorities could have done was to have quarantined them and given them the necessary innoculation.  Ashiru, however vowed that Nigeria would react in a matured and calculated way on this assault on our people.

The Tide also gathered that the Federal Government also summoned the South African envoy to demand an apology and to ensure that their officers involved in the department responsible for the deportation of 125 Nigerians are punished.

The Foreign Affairs Minister also hinted that a probe into expatriate quota abuse by some South African companies was ongoing and that culprits would be dealt with.

But in a swift twist of events the Pretoria Government has apologized to Nigeria describing the deportation of 125 Nigerians as regrettable.

Ashiru who confirmed this in Abuja yesterday said the South African Government has promise to vaccinate travelers at airports rather than deporting them.

The Tide recalls that the World Health Organisation, (WHO) has  designated Nigeria as Yellow Fever free, facts attested to by the Minister of Health, Prof Onyebuchi Chukwu who was  quoted by the Nigerian media as saying that there had been no cases of yellow fever disease in Nigeria in the past 13 years, 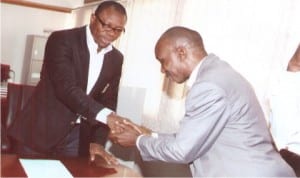