A Briton and an Italian abducted by gunmen in Nigerian last year have died in a failed rescue attempt. They were murdered by their Boko Haram captors and those involved have been arrested according to President Goodluck Jonathan in a statement.

President Jonathan condemned the murder of the two foreigners before they  could be rescued in a joint security raid on the kidnappers hindeout, the statement said.

The statement added that the president particularly commended the co-orperation of the British and Italian governments and assured that the perpetrators of the murderous act who have all been arrested will be made to face the full wrath of the law.

The two foreigners were kidnapped by heavily armed men who stormed their apartment in the city of Birnin Kebbi, capital of Kebbi State in May last year.

Also while  announcing the death of the two men in London, yesterday, UK Prime Minister, David Cameron, said “it appeared Chris McManus from North West England and Franco Lamolinara had been murdered by their captors before they could be rescued. Britain supported the Nigerian-led operation”, Cameron said.

Cameron said the authorities had decided to go ahead with the rescue operation based on credible information on the men’s location.

“A window of opportunity arose to secure their release. We also had reason to believe that their lives were under imminent  and growing danger,” he said.

The Prime Minister said “it was with great regret that he had to announce that Mcmanus and Lamolinara had lost their lives in the subsequent operation”.

Cameron offered his condolences to the two families.

Both families have endured a terrible ordeal and this is a devastating moment”, he said.

‘I want to pay tribute to all those including UK personnel who worked so hard to try to bring Chris home safetly”, Cameron said.

“I am very sorry that this ended so tragically. Terrorism, appalling acts such as this are a and scourge on our world”.

Meanwhile, Mr Mcmanus’ family released a statement saying they were devastated by his death but thanked those who had tried to free him. 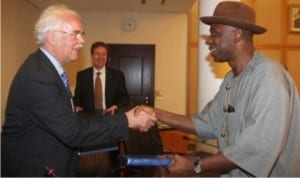 Beyond That Apology …Nigeria Must Earn S’Africa’s Respect

Why S’ Africa Apologised To Nigeria