The Rivers State Director of Sports, Sir Daobu Harvest Harry has revealed that a comprehensive sports policy will soon be unveiled for the people of Rivers State

Sir Harry who disclosed this yesterday at a  forum orgainsed by the Rivers State branch of sports Writers Association of Nigeria (SWAN), further said i that a draft sports policy has already been presented to the Rivers Sport Commissioner, Hon Fred Igwe.

He explained that while the draft sports policy already has the input of some stakeholders in the sports sector, the document would still be made available to allow more people contribute on the way forward for sports development in the state.

According to him, the draft of the Rivers State Sports policy is ready and we have handed it over to the Sports Commissioner. It is to give direction to sports development in Rivers state.”

The Director of Sports, who gave an insight into what the sports policy contains, disclosed that everybody, including companies operating in the state, local governments, traditional rulers, schools,  Ministry of Education, market women, transporters, among others have been incorporated in the draft copy.

Sir Harry particularly emphasized that the task of providing sports facilities and talent discovery does not lie solely with the government, pointing out that everybody has a role to play in the development of sports.

He lauded the Rivers State government for building a brand new stadium named after former international, Adoki Amiesimaka decribing the facilities at the stafium as world class.

Harry called on local government chairmen in the state to emulate such lofty idea by building mini stadium in their respective councils, arguing that the provision of such facility would go a long way in

helping to discover talents at the grassroots.

On the forthcoming 18th National Sports Festival to be hosted by Lagos State, and for which Rivers State is the defending champion, he declared that the state was ready to dust all comers again.

According to him, “we are the defending champions, we are ready to prove that we won not because we hosted but because we prepared well and won. We are going there to prove and defend our position.”

We are trying to take sports to the next level,” he stressed.

On plans to catch talents at an early age and nurture them, Sir Harry revealed that the Sports Council would work in partnership with the Ministry of Education, especially in the area of schools’ sports and regular holding of inter-house sports to enable officials of the sports council spot talents for effective monitoring to greater heights.

He argued that the sports council would take its time to plan a well structured programme that will help the young talents besides their educational pursuit.

Sir Harry expressed the willingness of his administration to partner with SWAN in Rivers State, while calling on the association to expedite action on sending its member to various sporting associations in the state.

Chairman of Rivers SWAN, Mr Honour Sirawoo thanked Sir Daobu Harvest Harry for honouring the association’s invitation and promised to continue to partner with stakeholders in the sports sector.

Sirawoo, who was represented by his vice, Mr Martin Giadom, explained that the SWAN Forum would be a regular feature, aimed at interacting with sports administrators, decision makers and those that matter in the sports sector.

The Forum was also attended by the Public Relations Officer of the Rivers State Sports Council, Mr Barisi Wifa and SWAN members from all the media houses in the state and beyond. 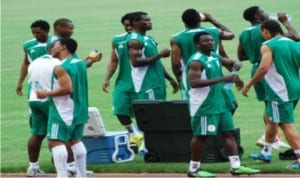 Eagles players at a training session