About three persons have been reportedly killed while property worth millions of naira destroyed in a communal clash between Unyeada and Asarama communities in Andoni Local Government  Area of Rivers State.

Among the dead were two persons from Unyeada and Asarama communities, while the third was from Ngo.

The Tide also learnt that the palace of the Okan Ama of Unyeada, His Royal Highness, King Israel Otuo was also razed down in the process.

Sources told The Tide that trouble started when a boy from Unyeada attempted to snatch a girl friend of an Asarama boy during a Valentine party.

The situation, The Tide learnt did not go down well with the Asarama boy who allegedly stabbed the Unyeada boy, resulting in the  fracas that led  to the  destruction of houses and killing of three people.

As at the time of filing this report, the two communities had been deserted, while a dawn to dusk curfew has been imposed by the Joint Task Force (JTF) which is currently occupying the communities.

When contacted on phone, the state Police Public Relations Officer , Mr Ben Ugwuegbulam told The Tide that he needed to be properly briefed before making a statement on the matter.

The Andoni Local Government Chairman, Hon Orom Nte Efereokuma could not be reached for comments, but one of his aides, Mr Jackson Sarigama explained that the council was on top of the situation.

Also, Chef Jacob Jackson Irikana of Egendem urged the government to beef up security in the area to  forestall further breakdown of law and order.

The Okan-Ama of Ngo, Uboon (Dr) U.D Ngere  also condemned the act, and appealed for more security presence in the area. 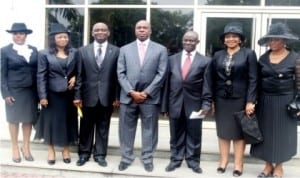 Danger Next Door …As Lassa Fever Claims Casualty In Rivers