Nigerians may be thrown into yet another cloud of economic uncertainty, scarcity and hike in prices of petroleum products if the Petroleum and Natural Gas Senior Staff Association of Nigeria (PENGASSAN) and the Trade Union Congress (TUC) make good their threat to embark on an indefinite nationwide strike, after tomorrow.

Presidents of both PENGASSAN and TUC, Comrade Babatunde Ogun and Peter Esele respectively, in separate interviews with The Tide in Port Harcourt, Monday, said the Ministry of Labour and multinational companies operating within the Onne Export Free Zone should be blamed for the consequences of the unions’ actions.

Comrade Ogun told The Tide that apart from engaging in anti-union activities, ranging from intimidation, harassment, lock-out, victimisation and enslavement of Nigerian workers, the Country Manager of Vam Onne Nigerian Limited, Eguene Fogli, a pipeline threading casting and tubing company was in the habit of flouting extant labour laws by sacking Nigerian workers without recourse to the Department of Petroleum Resources (DPR). The firm, however denied these allegations.

The PENGASSAN President recalled that on October 20, 2011, the association wrote the Managing Director/Chief Finance Officer of Marine Platform Nigerian Limited (MPL) over the termination of the appointment of one of its members, Comrade John Ukegbu as a result of his active participation in the formation of the union in the company.

In the letter titled ‘Unlawful Termination of Appointment of John Ukegbu, PENGASSAN had accused MPL of violating the circular on the release of Nigerians from employment in the oil and gas industry, “as you did not apply to the DPR’, before releasing such members”.

Speaking in  separate interviews with The Tide, the President of TUC, Comrade Peter Esele said the 10 year moritarium for waivers granted companies operating in the Free Zone had long expired but the operators had continued to exhibit flagrant disobedience to labour laws.

According to him, while PENGASSAN was protesting the sack of one of its members, 27 others were later eased out without following laid down procedures.

All affected staff were engaged by MPL, a firm of labour contractors and then seconded to Vam Onne Nigerian Limited, outsourcing of such requirements by multi-national companies was not a strange practice, The Tide learnt.

In defence of its position, on the engagement and easing  of staff based on the contract details, the MPL, The Tide further learnt sought and got an order of interlocutory injunction from the National Industrial Court of Nigeria, Enugu judicial division, restraining the respondent, namely PENGASSAN, Comrade F. Otono, Port Harcourt Zonal Acting Chairman and Comrade Sunny Onyemachi, by themselves, their agents, proxies and servants by any means whatsoever from mounting canopy and chairs, thereby barricading and or preventing the management, staff of the applicants from gaining access and gaining possession of the company’s gates and premises, pending the determination of the instant suit.

That order which was issued Monday, December 5,2011, in suit No NIC/EN/28/2011, The Tide further gathered was yet to be discharged and the substantive suit still in court.

The Tide asked both Presidents of PENGASSAN and the TUC whether the union’s action on February 7 to 9,2012 was not in contravention of the subsisting court order, both said the unions were tired of the rigmarole being orchestrated by the MPL, Vam Onne and some politicians.

According to Comrade Ogun, “ it is now clear to us that the only language the Nigerian government understands is either strike or  threat of strike”, saying, if by the expiration of their seven-day ultimatum to Rivers State Governor, Chibuike Amaechi, the issues were not addressed, PENGASSAN would shut all oil and gas production in the state and later  embarked on a nationwide strike.

The PENGASSAN President said,  the position was irrevocable because the Deputy Speaker of the State House of Assembly, rather than resolve the matter, allegedly collaborated with Vam Onne to assault its members who were on peaceful protest, an allegation the Assembly Deputy Speaker denied. 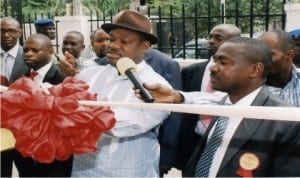