Some Ministers and Directors-General may soon be swimming in troubled waters over injection  of new projects worth over N1trillion outside the 2012 Appropriation Bill as presented by President Goodluck Jonathan to the National Assembly.

These projects, the Senate has sworn to  remove from the 2012 Budget.

According to the Chairman, Senate Committee on Appropriation, Senator M’hmed Maccido, such projects smuggled in by ministers and the agency for MDGs accounts for more than 40 percent of the projects in the budget they are defending in the National Assembly.

His words, “We are seeing projects that are not in the original version of the budget presented to us by President Goodluck Jonathan and substantial part of these projects are being smuggled into the budget by the MDGs and ministers .

“ Over 40 percent of the projects in the budget are not in the original budget. And we are saying no, to them.  The items so smuggled into the budget are over N1trillion”

Senator Maccido who noted that process of screening out these projects accounted for some delay in the process but insisted that all such projects must be weeded out.

“. We are right now comparing the budget as originally presented by the President and the version presented by the MDGs. Unless these projects are there in the original budget, we are going to scrap them. It is no longer going to be business as usual”.

The Senate’s position is coming barely one week after President Jonathan warned ministers over lobbying the National Assembly to increase their budgetary allocations and thereby distorting the Federal Government’s projections.

Such conducts, President Jonathan said would attract the wrath of the Presidency. 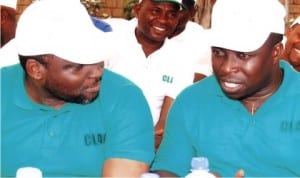