A new pipeline belonging to the Nigeria Agip Oil Company (NAOC) was, Saturday, attacked and destroyed in Bayelsa State. The pipeline has crude export terminal in the coastal town of Brass.

The Movement for the Emancipation of Niger Delta (MEND) claimed responsibility for the attack in an online statement on Saturday.

A statement by MEND’s spokesman, Jomo Gbomo, said the attack was occasioned by the detention of Henry Okah in South Africa.

Meanwhile, the  Joint Task Force in the Niger Delta code-named “Operation Pulo Shield”, has criticised Saturday’s attack on the NAOC pipeline at Brass.

A statement issued by Lt Col Timothy Antigha, spokesman of the Force yesterday, expressed concern at a statement purportedly issued by the Movement for the Emancipation of the Niger Delta (MEND), claiming responsibility for the attack.

“The JTF condemns the attack in view of all that it portend for the region.’’

The spokesman said in response to the genuine agitation of the people of the area for development, the Federal Government had embarked on various programmes to address the infrastructural deficit in the Niger Delta.

“But unfortunately people who were never part of the agitation have emerged and want to claim amnesty and its benefits by force. “It should be noted that it is not possible to run an inelastic amnesty programme.”

Antigha urged the people of the Niger Delta to support the security agencies to defeat “the evil that is rearing its head’’ by giving timely and accurate information through the usual channels.

He said there could be collateral damage if individuals and communities decided to provide sanctuary to criminals. 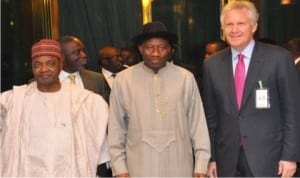