Liverpool may hold the advantage going into the second leg of this Carling Cup semi-final, but their squad come into this match with a very different morale to that of the opponents, Manchester City following this weekend’s results.

The Reds were abject in their defeat by Bolton, yet another match in which huge question marks were raised over the purchases manager Kenny Dalglish had made since returning to the club. His furious reaction to the performance of his players was pointed: “If that’s the level they expect this football club to play at, they won’t be here long,” he said.

In contrast, Roberto Mancini’s Manchester City side are on a high following their sensational injury-time win over Tottenham on Sunday that bore all the hallmarks of a side destined to win the title.

But they still have it all to do in this tie given they trail 1-0 after the first-leg.

Winning at Anfield is also not something they are accustomed to – it has been nine years since their last victory there. Given how intimidating the Kop can be on a midweek cup night – and Liverpool’s desperation to play at Wembley for the first time since 1996 – Mancini’s men may have it all do.

Kenny Dalglish is demanding an immediate response from his Liverpool players ahead of a critical week in which they face two huge cup ties which could shape their season.

Having fallen six points behind fourth place in the table – and a UEFA Champions League qualifying spot – after a surprise 3-1 defeat at struggling Bolton last weekend, Dalglish’s side entertain bitter rivals Manchester United on Saturday.

The FA Cup fourth round tie will be the first time the two clubs have met since Luis Suarez was hit with an eight-match ban for racially abusing United’s French defender Patrice Evra in a league match on 15 October.

But before then Liverpool take a slender 1-0 lead into the deciding leg of the League Cup semi-final against Manchester City at Anfield on Wednesday.

Having gone six years without winning major silverware, Dalglish knows Liverpool cannot afford to mess up against the Premier League leaders, particularly after their season hit a new low with the defeat to Bolton.

The Liverpool manager believes the forthcoming cup ties could have been on the minds of some of his players last Saturday, but Dalglish has made it clear he will not tolerate any more sub-standard performances from his players.

“All season we’ve been very complimentary about the way the boys have gone about their work, but I don’t think you could say that on Saturday,” said Dalglish. “Their approach to the game was poor.

“If you have pride in yourself and in the football club that reflects in the effort you put in. I don’t know where that attitude came from but it needs to go quickly. Whether they had their minds on the next two games, I don’t know. But every game we play is an important game.

If you have pride in yourself and in the football club that reflects in the effort you put in. 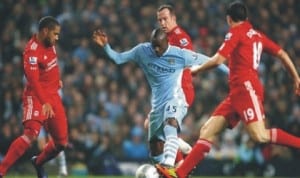 Liverpool players fighting for the ball against Man City