Nigerians have dismissed as impracticable the impression that the security threat which the Islamist extremist group, Boko Haram poses today is capable of dividing the country along religious lines.

This is the aggregate view of Nigerians sampled in an opinion survey conducted on-line by The Tide.

A Port Harcourt-based Solicitor and Advocate, Mr Reginald Nnwoka said Nigerians had grown beyond the level of being divided by security threats of the kind which a handful of unguarded  terrorists today pose.

The legal practitioner is  confident that governmental structures properly rooted in our current democratic experience and on-going efforts to properly equip the security forces would check the excesses of the Boko Haram  at the right time.

Nigerians, he said, had grown to overcome ethnic, religious and tribal differences as evidenced in the kind of cross- cultural, cross-religious and cross-ethnic marriages being consummated in the country in the past many years.

While conceding that the Islamist extremist group poses a threat to the stability of the nation, he called on President Goodluck Jonathan to prove to Nigerians that he is indeed the Chief Security Officer of Nigeria by tinkering plausible ways of equipping the security agencies to rise up to the challenge.

Another legal practitioner, Mr Amglad Imabibo said it was actually sad that some Nigerians were deliberately playing out a script written by a foreigner that Nigeria will be divided by 2015.

Barrister Imabibo decried what he described as double speak by many influential northerners and said unless adequate steps were taken to curb the excesses of Boko Haram, Nigerians stand to face more devastating security challenges.

He ruled out the possibility that a handful of terrorists could divide Nigeria but warned that unless all Nigerians unite against the terror organisation the group could inflict unimaginable harm to the secularity of our constitution.

A contractor, Mr John Igani said if division of the country would bring about the much-needed peace and development why should anybody break his head over it.

A Bauchi born transporter of cows, Alhaji Ganiyu Shettima said whoever was calling for the division of Nigeria along any lines was on his own.

According to him, he had raised a family of six children, four boys and two girls with an Onitsha born woman, Adaeze and could not break that union for any reason. He said since his first wife, Ramatu whom he married according to full Islamic rites died in September 1998, his major source of joy had been his current union with Adaeze.

Another young secondary school leaver of dual parentage, Haruna Nkem Haruna, who has an Igbo mother and Kanuri father said although he spends more time with his father in Kwara since the marriage of his parents was estranged , his father had not abandoned the needs of his mother, his two younger sisters and himself.

According to him,  while he is a Muslim, his two younger sisters are Christians and wondered how the division of Nigeria across religious lines would affect his once happy family.

Mr Haruna vowed to support all positive forces including the Federal Government to defend the unity and security of Nigeria and hoped that all men of good would unite against the negative distraction which Boko Haram today represents.

On her part, a Port Harcourt-based trader who deals on pork meat, Mrs Comfort Isetima said her last two children were fathered by a butcher-husband of Hausa extraction who lives and plies his trade in Port Harcourt with whom she has co-habited happily.

Although her husband is a moselm from Kano and  she a Christian from Rivers State, they had never considered religion as a negative variable for their union, and wondered how anyone could impress on them such unsolicited separation on account of division of the country along religious lines.

A youth corps member serving in Port Harcourt, Miss Tosin Adetokunbo said at the end of her service year, her spouse Malam Adamu Ibrahim from Sokoto and herself hope to get married according to Christian marital rites, herself being a Methodist even if the groom to be is an avowed moslem.

The understanding between them, according to her, is that after the consummation of their marriage, she would study the benefits of Islam and  thereafter consider sharing her husband’s religion.

Where will a divided Nigeria based on religious and ethnic differences keep them and the love they have shared since  their first year in the university?

She called on youths corps members believed to be beacons of national unity and integration to join forces with all constituted authorities in preaching peace instead of violence, love instead of hatred and social cohesion instead of religious divisions.

Out of a total of 97 respondents who reacted to our questionnaire, only two expressed pessimism that Nigeria could come  out of its unity.

Meanwhile, the Joint Military Taskforce has arrested 158 suspected members of the Islamist Boko Haram organisation in raids in the northern city of Kano.

Boko Haram said it carried out a series of bombings in Kano last Friday in which at least 185 people died.

The group says it wants to overthrow the Nigerian government and imposes Islamic law.

There were two casualties from Tuesday’s dawn raids, carried out by the Nigerian Joint Military Task Force.

One resident of Kano said officers had encircled a house where a Boko Haram suspect was believed to be hiding. The shoot-out lasted several hours.

“They began shooting, and he fired back… This was followed by a barrage of gunfire by the security men,” Mohammed Maikubi Bala told our correspondent.

In a statement released on Tuesday, Amnesty said the Nigerian government should do more to tackle the group.

“The Nigerian government has repeatedly failed to prevent, investigate, prosecute or punish these acts,” it said.

The key suspect in a Christmas Day bombing on a Catholic church – believed to be a member of the Islamist sect Boko Haram – escaped from police custody earlier this month.

At least 40 people died in that attack. 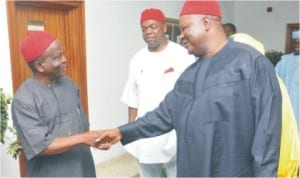 President,Academic Staff Union of Universities (ASUU), Prof. Ukachukwu Awuzie (left), in a handshake with the Secretary to Government of Federation (SGF),Senator Anyim Pius Anyim (right), at a meeting between Federal Government and ASUU in Abuja on Monday.With them is the Minister of Labour and Productivity, Chief Emeka Wogu