Some South-South and South-West leaders have urged President Goodluck Jonathan to sack all those with doubtful loyalty from his government and the security services.

Our correspondent reports that the leaders made the call in a communique at the end of their inaugural meeting last Saturday at the residence of Late Chief Obafemi Awolowo, in Ikenne, Ogun State.

The leaders stated that the call was against the backdrop of the President’s recent comment that Boko Haram had infiltrated the government, the Armed Forces, the National Assembly and the judiciary.

They also called on the President to regard the activities of Boko Haram as treason and apply the relevant laws on any of them caught and their sponsors.

The communiqué jointly signed by Chief Edwin Clark and Bishop Bolanle Gbonigi, condemned the killing of innocent Nigerians by the Boko Haram sect and noted that the group was posing serious threat to national unity.

They condemned Friday’s multiple bomb blasts in Kano and expressed support for the deployment of the military to all areas affected.

The leaders also joined the call for the sanitisation of the oil and gas industry, reduction in the cost of governance and total war on corruption to ensure sustainable growth of the economy.

The communiqué also called for a national conference to fashion out a new constitution for sustainable national unity. 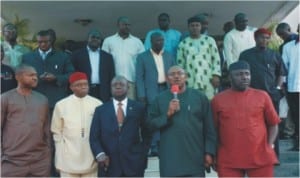 Sins Of The Fathers (II) …How Nigerians View Subsidy Removal