A civil society organisation based in Lagos, the ‘Save Nigeria Group,’ has dissociated itself from calls by one of its former members, Pastor Tunde Bakare, calling for regime change.

Addressing newsmen at a press conference in Abuja, National Co-ordinator of the ‘Save Nigeria Group’, Mr Benedict Ezeagu, expressed dismay that Pastor Bakare had been calling for regime change as if it were the view of the civil society’s official position.

Mr Ezeagu said Bakare had been suspended from the Save Nigeria Group since June 2010, and could not claim to be speaking for it.

While acknowledging Pastor Bakare’s constitutional right to hold opinion on any issue, the group said such views should be couched with all sense of responsibility and within the context of existing laws.

The National Co-ordinator said at no time did the Save Nigeria Group call for regime change and could not have, considering the fact that there were laid down rules of enforcing such tall order in a democratic system with existing structures.

Pastor Bakare, the group warned, must desist from using the Save Nigeria Group to feather his political nest as the civil society organization had not and could not have contemplated clamouring for regime change.

The group expressed disappointment that at a time well-meaning Nigerians were working round the clock to move the country forward and ensure peace and stability, some politicians are busy trying to heat up the polity with outrageous calls for regime change.

For now, the group said, the Federal Government headed by President Goodluck Jonathan, had proved to be a listening engine and deserved all the support Nigerians could muster to succeed in reforming the country’s economy. 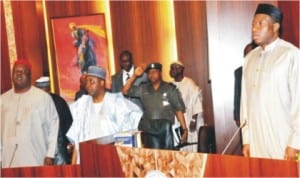 R-L: President Goodluck Jonathan, Vice President Namadi Sambo and Secretary to the Government of the Federation, Senator Anyim Pius Anyim, during the Federal Executive Council Meeting in Abuja on Wednesday.

Sins Of The Fathers (II) …How Nigerians View Subsidy Removal