President Goodluck Jonathan’s meeting with the leadership of Labour failed last night to resolve the petrol price crisis. It was inconclusive. The talks continue tomorrow.

President of the Nigeria Labour Congress (NLC) Abdulwaheed Omar declared after the meeting that the strike, which started on Monday, will continue today.

But he said Labour and the government shifted grounds.

The government asked Labour to call off its strike, besides insisting on “total” deregulation of the downstream sector of the oil industry  an action that shot up the price of petrol from N65 to between N138 and N200 per litre.

Labour insisted on reversal to N65. But Omar did not give details of the shift in positions.

After the five-hour negotiation, the government offered N120 per litre for petrol, down from N138 and N200 that it has been sold since January 1.

The government team said they would not go back to N65. But Labour insisted on the mandate from workers  for N65 per litre.

A source at the meeting said: “The President set the tone for the meeting with preliminary remarks which bordered on his usual points that everything was done in the interest of the nation and not to punish Nigerians.

“Shortly after the opening remarks, he left the negotiation hall with the Vice-President. But Senate President David Mark took over to moderate the session.

“After the usual appeal and justification for deregulation by all the governors and other Federal Executive Council members, the government said it would not go back to N65 per litre. It, however, said it will be willing to peg the pump price of PMS at N120 per litre.

“The government was emphatic that it will not go below N120 per litre although some government officials were saying in confidence that if Labour pushes for N100 per litre, the government may concede.

“The way the government presented its arguments, they were not too keen on return to N65 per litre, they were more interested in security implications of the ongoing action. They were raising issues on how things will not get out of hands. That made the Labour to be suspicious.

Governor Adams Oshiomhole said he knew the thinking of Labour but now that he is on the other side, he knows what he is experiencing. He, however, did not say what he is going through in office.”

“The NLC President and the TUC President, Peter Esele spoke on why the labour will not trade away the N65 per litre mandate given to them by workers.

“The Labour went further to say that the government must reverse the pump price to N65 with a 90-day moratorium to enable all stakeholders look at the challenges of subsidy, pump price and find ways for appropriate pricing for the PMS.

“The idea is that within 90 days, a larger committee will look at the entire subsidy picture and the deregulation plans of the government and find a common ground. But this window was not acceptable to the government.

“When the deadlock was evident, the Labour leaders said they will go and consult with their National Executive Committee on Saturday and get back to the government the same day. No time was fixed for the resumption of negotiation on Saturday.”

Omar said: “The outcome is that we have not concluded discussions yet but we have had fruitful discussions and we re to continue on Saturday.”

On whether both parties shifted ground, he said: “Yes; it’s part of it. Of course, all of us are trying to shift ground, that’s why I told you that we have had fruitful discussions.”

On the possibility of the strike being called off, Omar said: “Unless and until we get a conclusive conclusion from the discussion; that means we’ll maintain status quo.” The meeting, which was held at the Presidential Villa, started at about 4pm.

With Omar on the Labour side were Peter Esele and 14 others. There were also Civil Society Organisations, representatives.

However, former military Head of State Gen. Yakubu Gowon has urged the Federal Government and labour to engage in dialogue “without any condition” to facilitate a quick resolution of the anti-fuel subsidy withdrawal strike.

“The strike is assuming strange dimensions and has been taken up by groups that are causing violence, destruction and deaths. This is unfortunate and unnecessary,” he told newsmen yesterday in Jos in a telephone interview.

Gowon challenged labour to consider the hardship the strike was causing to innocent Nigerians who could not do their normal business, and called for “absolute care, patriotism and consideration” from all parties.

He likened the current impasse on the fuel subsidy removal to the resentment his government faced when he introduced the NYSC scheme in 1973.

“When we introduced the scheme, it was stiffly rejected. We were called names by people, who said we wanted to enslave the youths. “But I was determined and honest about it. I was looking at the future and wanted the young Nigerians to have a feel of what other parts of the country were like, because I knew that such youths were certain to be Nigeria’s leaders in future. “After the scheme took off, I visited some camps and the corps members apologised for their initial demonstrations against it. Since then, the corps members have continued to play prominent roles in national development as witnessed in the last elections,” he noted.

He said he had listened to the strong argument put across by the CBN Governor over why the fuel subsidy could not be sustained, and had also listened to suggestions that those benefiting from it (subsidy) would seek to create a situation where it would continue.

The former leader decried a situation where leaders of some political parties were getting involved and making statements that had little or no link with the issue at stake, and suggested that leaders should rather work toward resolving the issue.

He commended the police authorities for apologising and taking steps to deal with a police officer who allegedly shot some protesters in Lagos, stressing that such “irresponsible” officers should not be spared, “as they usually give the government and the nation a bad name”. 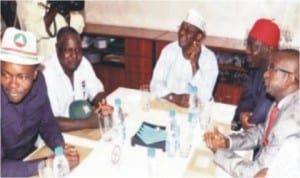