From when Nigeria’s serving President Goodluck Ebele Jonathan took oath of office as Vice President to his principal, Late President Umaru Yar’Adua in May 2007, up to when, on account of his master’s death he became acting President and re-elected May, last year up till December 31, 2011, not once did Nigerians witness official hike in prices of petroleum products, particularly fuel. Instead, the price of fuel was slashed under the duo’s watch, from N75 per litre to N65.

Also, due largely to the liberalization of the petroleum sub-sector, the perennial problem of long queues at filling stations on account of scarcity of the product was eliminated. What was scarce was kerosene. But why? Marketers needed it to adulterate aviation fuel.

Why then should one with such pedigree become a saddist over-night? Why should a child of very indigent parents from the little town of Otueke in today’s Bayelsa State, who, so poor, could not afford footwears to school, choose to inflict on others such pain, hunger and endless suffering of the kind Nigerians today protest against, simply because he has crossed the crucible? Why should a President who promised a breathe of fresh air turn around to choke the masses with such grueling discomfort, by the removal of what is said to be left of the subsidy on petroleum products?

In fact, why is the Nigerian President, allowed to be so powerful as to unilaterally wage such a war on his own people and still cow all other political, natural and spiritual leaders into submission? Why does the vibrant National Assembly feel helpless and instead urge dialogue? Why? Why now?

Or, is it simply a case of the child not being able to see, even from a roof-top, what an elder sees sitting?

Furthermore, why should one so popularly elected, devoid of ethnic, religious, class, regional or even partisan political lines choose to lose such popularity, just for the sake of being a saddist? Is power such an intoxicant as to change a once amiable gentleman into an incurable political drunk? Why? Why now?

Most importantly, why has Mr President refused to change course in the face of increasing protests in Lagos, Kwara and elsewhere, with an even bigger threat by both the Nigeria Labour Congress (NLC) and the Trade Union Congress (TUC) to join the sway today? But was it not the same President who, priding himself as a listening leader once ate his words, on account of public outcry, after his publicly pronounced ban on all Nigerian’s teams participation in any FIFA organised soccer competitions for two years? Why? Why not now?

Even so, desirous to be fair, albeit reluctantly, I laboured to weigh the other side of the argument, if for nothing else, to satisfy my conscience that my case against a wicked President, who promised a breathe of fresh air was and is still rock-solid; that the Otueke born indigent son, has, like others before him, actually kicked off the ladder, from whence he hit the summit of power and opted to inflict on others, the same pain and anguish he once faced as a child of indigent parents, not to mention that he has chosen to change from Goodluck to badluck as mocked by a former member of the House of Representatives, who led a less-than-co-ordinated protest in Lagos last week, against the removal of subsidy on petroleum products.

First, I considered the President’s motive and then asked what he stood to benefit from his action. How, I wondered further, could a President facing serious security challenges, on account of the danger which the Boko Haram Islamist Sect today presents, chose to cut his nose to spite his face?

Then I got an SMS message from an unfamiliar cell phone number and since, at times like this no information must be considered useless; I rushed through it and wondered: Could the President or his men be reading my thoughts and chose to present their own case? Impossible! If they had such supernatural tracking devices, why is the Boko Haram terror group still a spoilt spot to all?

Not willing to give the President and his men such credit of clairvoyance, I reluctantly went through the message again. Holy Moses! I screamed without knowing I did so loudly.

It was then, I came to the painful realisation that what Nigerians have been protesting against was in fact, support for a cabal of very powerful and super-rich oil marketing cartels who found in the so-called subsidy, their own conduit for smoothly amassing public funds and have for years held the nation captive. With such power, they imported petroleum products and determined the cost. And each time any government dared question their guts, they create artificial scarcity of petroleum products to force successive governments to negotiate the amount of public funds to vote in support of their clandestine pass-time. And because of the huge profits, they grew in ranks and directly or indirectly frustrated refineries from running at full capacity.

Just as powerful generator importers have for years frustrated the actualization of uninterrupted electric power supply in the country, these petroleum products importers are capable of determining  what Nigeria must pay for their own imports or make consumers to queue up for days, even weeks, at filling stations.

So, upon election as president, Jonathan had a choice to make: keep quiet, receive as much as N300 billion monthly in bribes to look the other way, let it remain business as usual and vacate his seat, richer than Nigeria in four years or call the bluff of the vicious importers, stop paying the cabal what was erroneously considered subsidy, and rechannel those funds to more productive uses, including of course, job-creation, through Turn Around Maintenance of the refineries; huge investments in Agriculture and irrigation; provision of thousands of buses to check arbitrary hike in transport fares; improved funding for rural development, road construction and rehabilitation, education, crafts development, health and infrastructural development.

Simply put, government decided that rather than pay so much to an ungrateful cabal, running into trillions of naira annually in petroleum subsidy, such funds should be directed to other more meaningful uses. And then again, I read the SMS to behold the list of how much often went to the various marketing companies, and was convinced that, if its indeed factual, then President Jonathan might well be waging a war to take the loot from the super-rich 19 marketers and spread such funds among the most gullible of the societal chain.

Surely, that could cause temporary pain like the type President Jonathan himself suffered in Otueke, but one that will guarantee a brighter future for all, like the one that saw him through university up to the pinnacle of his political career.

The president’s crime is that rather than look the other way, and have his own ‘cut’ from the loot, chose to say, ‘No’. Let these funds be rechanneled into putting the refineries back on line and ensure effective competition that would force down prices of petroleum products. Remember the Telecom sector? May be not. We forget easily. Some Nigerians may remember, that some early subscribers bought mobile phones’ starter packs at between N17,000 and N20,000 but today, thanks to the deregulation of the sub-sector, service providers are virtually begging subscribers to pick such packs for as low as N100 naira.

Surely, it requires the courage and resilience of a Jonathan to carry the cross of political unpopularity in order to ensure that Nigerians enjoy a breathe of fresh air in the long run.

My Agony is that many, like me agree that it is indeed a right and courageous move to take but still wonder why it must be now and not latter? Answer? Never leave for later, what can be done now. Its called procrastination, the thief of time. 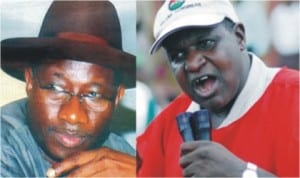