The Rivers State Governor, Rt. Hon. Chibuike Rotimi Amaechi has assured that citizens of the state would enjoy stable and constant electricity by December, this year.

The governor said his administration was aware of the current challenges facing the people, and would tackle them promptly, adding that his government is fully aware of its commitments to the people and would always fulfill them to meet expectations of Rivers people who elected him into office.

Governor Amaechi reaffirmed that plans were ongoing to provide stable and constant electricity in the state by December 2012.

He further reiterated that the ongoing work on the Ada-George Road in Port Harcourt would be completed before the next rainy season, adding that the Ogbogoro road project would be finished soon.

On the Elekahia Streetlight project, the Governor said his government expects the contractor handling the project to finish soon so that the streetlights could beautify the environment at night like the Ken Saro-Wiwa road.

On Security, Governor Amaechi pledged his administration’s preparedness to guarantee the safety of lives and property of both Christians and Muslims in the state.

“Nigerians need to support President Jonathan on the issue of fuel subsidy withdrawal. Believe me, things will change and things have got to change,” he said.

He urged Nigerians to be patient, show understanding and together bear the pain in expectation of the benefits to come from fuel subsidy withdrawal.

He also appealed to the Nigerian Labour Congress (NLC) to have a rethink on President Jonathan’s decision to remove subsidy on petrol. 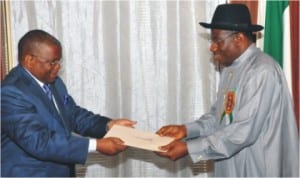 The President’s Cross …As Jonathan Battles To Be Understood