Ikoiwak made the remarks yesterday in Port Harcourt at a stakeholders interactive forum organised by the Independent National Electoral Commission (INEC) in the state.

Our correspondent reports that the re-run is between Mr George Sekibo of the Peoples Democratic Party (PDP) and 11 candidates from other political parties.

The Court of Appeal sitting in Port Harcourt had in November last year nullified the election of Sekibo (PDP) on the grounds that the candidate of the Action Alliance party, Mr Leslie Michael’s name was omitted on the ballot papers.

Ikoiwak said that the essence of the forum was to harness ways of improvement in the upcoming re-run election and curtail violence.

“I want to assure all of us gathered here and  many of the electorate out there that our task as a commission is to improve from what we did the other time and that the platform that we are going to use to experiment that improvement would come from us.

“I want to also appeal that all of us should work to make sure that we improve in our own little contribution to make the electoral process in Nigeria hitch-free, free, fair and brilliant.”

The electoral commissioner, however, advised all the players in the election to play the game according to the rule.

Ikoiwak said that already, the insensitive materials had been dispatched to the local governments while the sensitive ones were being expected.

Zaki said that the police were fully prepared for the bye-election and that 12,000 police personnel would be deployed for the election.

Nweye urged the parties to ensure that their agents had correct tags and mobilise the electorate to come out en masse to vote.

He, however, advised the voters to be orderly by queuing up and waiting patiently for their turn to vote, saying that jumping queue would bring about rowdiness and chaos.

Meanwhile, the Independent National Electoral Commission (INEC) has said it would continue to use every opportunity of election to improve on electoral processes in the country.

The Resident Electoral Commissioner (REC) in Rivers State, Elder Aniedi Ikoiwak who stated this at a stakeholders meeting ahead of Thursday’s Rivers East senatorial re run election, assured that it would surpass the April 2011 general elections in the state.

“This is to say, the election on Thursday will be an improvement of the April 2011 election in Rivers State.

The commissioner said INEC might not have attained perfect elections, but noted that the commission was working and committed to doing it right at every opportunity.

According to him, we must move from one point to somewhere and in a positive direction.

IKoiwak assured the electorate that INEC’s task was to improve on its last performance.

The REC, however, informed the stakeholders that already, some non-sensitive materials had arrived the state and distributed to INEC local government headquarters ahead of the election, while sensitive materials were due to arrive later through the Central Bank of Nigeria (CBN).

The Commissioner of Police, Mr Suluiman Abba, at the meeting said the police had been retrained for the exercise.

Abba said three police men would man one polling unit to ensure adequate security both for personnel and electoral materials.

The police boss, however, re assured that adequate security had been put together to ensure a free, fair and credible election that would be accepted by all.

Others who were in attendance at the meeting include the state Director of National Orientation Agency (NOA), NYSC, Prisons, Civil Defence and stakeholders from eight local government areas. 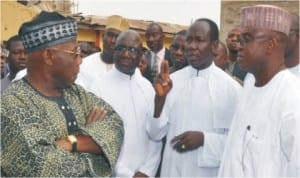