Amaechi, at a special reception organised in honour of members of Team Rivers at Government House, last Friday, announced a cash reward of N5.3 million to Mr Ebarakima Dino who won seven Gold, four Silver and three Bronze medals at the game.

He said that the gesture was in appreciation of the historic and spectacular performance of the state contingent to the 17th National Sports Festival.

The state chief executive remarked that this was the first time in Nigeria when the hosting state won the top position without any acrimony and complaint from the other states, stressing that “this is the second time Rivers State has hosted the game and has won it by setting a new national record which cannot easily be equalled.”

He thanked President  Goodluck Jonathan for attending the game and also awarding N20 million to the topmost winners at the games.

In the same vein, Governor Amaechi lauded the athletes and members of the Local Organizing Committee (LOC) for makingthe state proud, adding that it took personnel and collective sacrifices to achieve the feat while challenging them to perform better during the 2012 NSF games in Lagos.

Also speaking, the state deputy governor and chairman of the LOC of the games, Engineer Tele Ikuru whose address was delivered by the Executive Secretary of the LOC Barrister Bestman Nwokoh thanked the governor for giving them the opportunity to serve and his efforts as well as support to the LOC, officials and athletes which enabled Team Rivers to win the first position at the games.

In his welcome address, the State Commissioner for Sports, Barrister Mbumlu Igwe thanked governor Amaechi for rewarding the athletes and members of the LOC for their collective efforts. 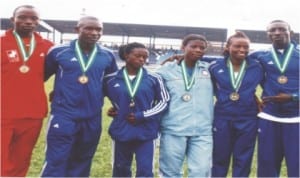 35 Communities In N’Delta May Disappear – Peterside