President Goodluck Jonathan says the Federal Government is to take steps to ensure that the Federal Ministry of Niger Delta Affairs and the Niger Delta Development Commission (NDDC) are better focused to carry out their assignments.

The President made the statement at the State House on Monday, during an audience with Bishop Hyacinth Egbebo of the Catholic Vicarage of Bomadi in Delta.

He said action would also be taken to ensure greater cooperation, collaboration and coordination between the ministry and the NDDC in the interest of the people of the Niger Delta.

Jonathan said the NDDC board was recently dissolved and reconstituted because of institutional paralysis, caused by internal strife among members of the dissolved board.

He said that he expected the new leadership of the commission to be more committed to the implementation of developmental projects that would benefit the ordinary people of the Niger Delta, including residents of the Vicarage of Bomadi.

“Our approach will be different next year. We will make sure that the NDDC is better focused and does what is right for the people of the Niger Delta,” he said.

He also pledged that there would be enhanced monitoring of the Federal Government’s developmental agencies in the Niger Delta to ensure that they fulfilled their objectives.

Our correspondent reports that Egbebo was accompanied by the Papal Nuncio to Nigeria, Dr Augustine Kasujja.

Earlier, the Bishop recounted the deprivations suffered by the people of Bomadi Vicarage.

He called on the Federal Government to intervene in order to improve transportation, water supply, power, education and other social services in the area.

The Papal Nuncio conveyed greetings from Pope Benedict XVI to the President and presented him with a Christmas card.

Meanwhile, the Senate Committee on the NDDC has directed the commission to send its 2012 budget estimates not later than March next year.

The Chairman of the Committee, Sen. James Manager, gave the directive in Abuja during the commission’s defence of its 2011 budget.

Our correspondent reports that the last NDDC board could not present the budget earlier, due to the in-fighting that characterised the life span of the board.

Manager said that the committee decided to consider the budget because the new NDDC board had just been inaugurated.

“We feel very bad for the late arrival of this budget. This must be the last time for your budget to even come this way. “In fact, your budget for 2012 must come not later than February or March of 2012, because budget is meant for the year. It is not meant for the end of the year. “We want to consider this budget because we are aware that the current leadership of the NDDC is not the same that started the year with us,” he said.

The Chairman of the NDDC, Dr Tarilah Tebepah, promised that members of the commission would ensure that all targets of the budget were realised.

He also gave assurance that the new board would be guided by the transformation agenda of President Goodluck Jonathan’s administration, which emphasises employment generation, wealth creation and poverty alleviation.

Also speaking, the Managing Director of the NDDC, Dr Chris Oboh, said the budget was set to address the foundation phase of the NDDC Master Plan.

The NDDC presented a budget of N251.75billion, comprising N249.45 billion for capital expenditure while N7.04 billion was estimated for recurrent expenditure.

Oboh told the committee that the 2011 budget was lower than that of 2010 by 49 per cent as a result of the efficient procurement system put in place by the NDDC management. 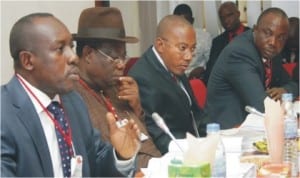