President Goodluck Jonathan, yesterday presented the proposed 2012, budget to the joint session of the National Assembly.

The proposed 2012 budget stands at N4.749 trillion naira, representing about six percent increase over the N4.48 trillion in 2011.

The petroleum subsidy allocation was not included in the budget, further confirming that subsidies on petrol will likely be abolished by this month, sending prices of petrol to figures in the region of between N140-N150 per litre from the current N65 per litre.

The National Assembly will now deliberate on the proposal and return same to the President after its deliberations.

While delivering his speech before the presentation, Jonathan said that “the 2011 elections, the inauguration of the new administration as well as constitutional amendment processes, all affected the full implementation of the 2011 budget.” He also said “the 2012 budget will be a stepping stone to Nigeria’s transformation”.

Speaking earlier on the determination of the National Assembly to ensure the full implementation of the 2012 budget through its oversight functions, Senate President David Mark remarked that Nigeria has “what it takes to be a world power, but we have never really tasked ourselves in this regard.” 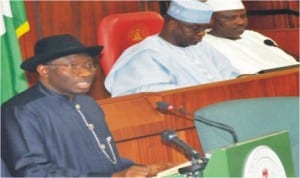