Senate yesterday passed the controversial bill on the Prohibition of same sex marriage in the country with a penalty of a jail term of 14 years for offenders.

This followed the adoption of the report of the Senate Committee on Judiciary and Human Rights which recommended the criminalisation of the practice in the country.

The recommendation of the Senate committee was not only a reflection of the opinion but also the outcome of the public hearing held last month on the bill during which most Nigerians voted for the outlawing of the practice amidst protests from gays and lesbians at the hearing.

The bill also kicked against the formation of gay clubs in the country with a sanction of 10 years jail term without option of fine for anybody guilty of operating gay club within the country.

Senate President David Mark in his ruling noted that the practice violates Nigeria’s traditions and customs, adding that the nation would not allow foreign practices to pollute the nation’s rich values.

His words, “if there is any country that wants to stop giving us aid because we want to pass the bill on same sex, that country can go ahead. We are a sovereign nation and we have the right to decide for ourselves because no country can interfere in the way we run out country. Same sex marriage is against our own culture and tradition and against our beliefs.”

Details of the bill shows that Section 5 of the new law provides that “persons who enter into same sex marriage contract or civil union commit an offence and are each liable on conviction to a term of 14 years imprisonment.

Also while section 3 of the bill provides that “only marriage contracted between a man and a woman either under Islamic law, customary law or marriage Act is recognised as valid in Nigeria”, section 1 (2) and (3) provide that “a marriage contract or civil union entered into between persons of same sex is invalid and shall not be recognised as entitled to the benefits of a valid marriage.”

However, section 5 (3) provides that “any person or group of persons that witness, abet and aid the solemnisation of a same sex marriage or civil sustenance of gay clubs, societies, organizations, process of meeting in Nigeria commit an offence and shall be liable to conviction to a term of 10 years imprisonment.”

In the same vein, section 4 (1) prohibits the registration of gay clubs in the country. The section reads, “the registration of gay clubs, societies and organizations, their sustenance, processions and meetings are hereby prohibited. Also, section 4 (2) reads, “the public show of same sex amorous relationship directly or indirectly is hereby prohibited.” 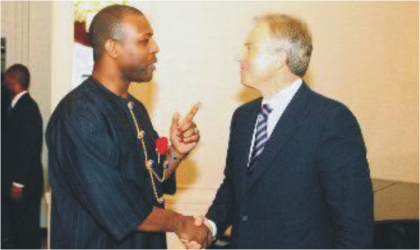