Rivers State Governor, Rt. Hon Chibuike Amaechi, has dismissed claims by critics that the Rivers monorail project is unrealistic, stating that the project is feasible and on course.

He explained that the construction process was slow due to its highly technical and delicate nature, and wondered why some people still criticise the government for the project in spite of progress made.

“The Monorail is under construction, but some people are bent on criticising us. Even though they see people working, they still say it’s been abandoned. It takes one month to build three of those columns. The construction is very slow and that’s because they don’t want any mistake; it’s a very technical thing,”he said.

The Governor noted that the project was conceived to address the increasing transportation problems faced in the city of Port Harcourt, while explaining that the technical report obtained was never against the Monorail but the ground rail system.

“It’s not that they criticised the monorail, the report was that the best form of transportation was the bus rapid system, but we have tried it and it failed. It didn’t work because of traffic, so we needed to create something else that can move people independent of the roads”, he explained.

Assuring Rivers people that the ongoing project was not a waste of public funds, Governor Amaechi remarked that as the project progresses citizens of the State would have cause to smile. “At each point we will put a train, that way, we will be able to shut the mouths of our critics,” he added.

Amaechi disclosed that the new monorail would run from the Old Town axis through parts of Diobu to Waterlines and Garrison axis before it is extended to other parts of the city.

On other issues, the Governor said 50 per cent of roads in Port Harcourt had been re-awarded while his administration was targeting 715 megawatts of power to ensure adequate power supply in the State.

“We have completed 460 mega watts, 130MW at Trans Amadi, 150MW at Omoku, 180MW at Afam. It is only 75MW at Onne that is not completed and we are negotiating with the contractor to complete it. We want to commence another 180MW at Afam to bring it to 715MW. We have transmission lines, so we are well at home with generation and transmission, the problem is distribution,”he  declared.

“So, we are talking with the Federal Government because we insist that they must allow us fulfill our promise that by December next year, people should have 24 hour regular power supply,” he added. 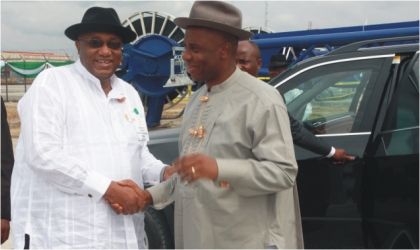 Beyond The Kokoma Dance …Who Ordered Sale Of $5.3bn NIPP Goods?