Amaechi made the call when he declared open a workshop organised by the Onne Oil and Gas Free Zone Authority tagged,” Practical Nigerian Content Forum” held on Wednesday at Onne in Eleme Local Government Area of Rivers State.

The Governor opined that,” local content is not only about employment it is about technology and the local people”.

Amaechi asserted that unless the local content scheme led to technology transfer, the policy would not make the necessary impact on the economy of the country.

He, however, stated that the Rivers State Government would do everything within its powers to assist the Oil and Gas Free Zone to enhance the scheme, especially in providing employment to its people. “If there is anything we need to do for employment and investment, be rest-assured we will do”, he said.

He assured that his administration would provide a conducive atmosphere for investments to thrive through enhanced security and infrastructure development.

Governor Amaechi charged participants at the conference to brainstorm on measures to stimulate economic development through the sector, while wishing them  fruitful deliberations.

Earlier, the Managing Director of the Onne Oil and Gas Free Zone, Dr Noble Abe disclosed that the zone had made tremendous strides as it had sparked a fresh economic hub in the region.

“ Since its creation,  a lot of investors have been attracted and about 30 companies are operating within the zone”, he said.

Dr Abe kicked against plans to indigenise the local content law, but advised on the need for the authorities to seek  fresh way of exploiting the comparative advantage of the country.

“ A study of the developed nations has shown that indigenisation is counter productive; such should not be done in the downstream sector…it will drive away investment instead of  encouraging it”, he declared.

He said the free zones would be able to drive economic development since it provides employment, foreign earnings and creates wealth.

Established in the late 70s, today, he noted that the area houses two terminals with a 12 tonne capacity loading stretching to about 4 kilometers of wharf jetty.

In the future, he stated that the area would be capable of conducting ship constructing activities, as it plans a fresh one million square of industrial area by 2014. 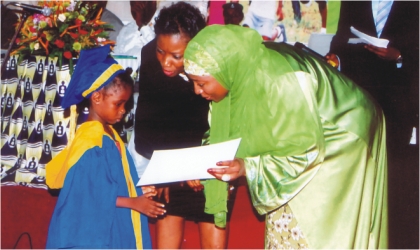 Representative of the First Lady and wife of the Vice President, Hajiya Amina Sambo (right supported by the Initiator, of Empowerement Support Initiative and wife of Rivers State Governor, Dame Judith Amaechi presenting a certificate to a kindergarten graduand in Port Harcourt, on Wednesday.