Delivering judgement on Monday on  a petition filed by the Rivers East Senatorial candidate of the Action Alliance (AA), Barrister Chizi Michael Atata  in Port Harcourt, the tribunal  nullified the election of Senator George Sekibo.

Chairman of the tribunal, Hon Justice Veronica M. Umeh said the commission’s refusal to effect an Abuja Federal High Court order directing it to include the name of the petitioner, Barrister Chizi Michael Alata in the ballot papers used for the  election, amounted to abuse of Judicial processes.

Hon Justice Umeh also described the situation as an infringement on the right of the Action Alliance to participate in the election.

According to her, it was the right of the INEC to either include the petitioner’s name on the ballot papers or postpone the election with a view to vacating the court order.

She, therefore, averred that the tribunal had no option but to nullify the election and ordered for a fresh one within the  next 90 days.

Reacting to the judgement, the lead counsel to the petitioner, Barrister G.M Okonkwo described the judgement as an addition to Nigeria’s jurisprudence and constitutionalism.

He also said by the judgement, the judiciary had once again shown that it was the hope of all Nigerians.

However, counsel to Senator George Sekibo, Mr Tonye Bisike said the pronouncement was thought-provoking, and urged the tribunal to make  copies of the judgement available to enable them advise their client.

Barrister Chizi Michael Atata, the senatorial candidate of the Action Alliance had dragged the Independent National Electoral Commission (INEC) and Senator George Thompson Sekibo to the tribunal over wrongful exclusion from the April 9, 2011 National Assembly elections.

Reacting to the tribunal’s verdict, spokesman for Senator George Sekibo, Mr Kevin Agbem expressed dissatisfaction with the tribunal’s jugdement, saying, moves to appeal the judgement were already in the offing.

Agbem enjoined members of the Peoples Democratic Party (PDP) and the people of Rivers East Senatorial District in particular to remain steadfast since democracy allowed even the minority to pursue its fundamental rights.

He also observed that since Senator Sekibo had remained committed to serving the people creditably, the mandate given to him by the Rivers East Senatorial District would be sustained even by the instrument of laws. 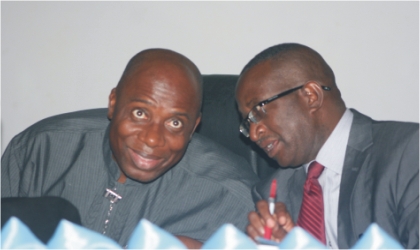