The Rivers State Government, has said that the proposed resuscitation of Risonpalm in partnership with the private sector will gulp the sum of N20billion in ten years.

The state Commissioner for Agriculture, Mr Emmanuel Chinda who said this, during the 2011 World Food Day in Port Harcourt, also said that the government was committed towards the realisation of N1.5billion tilapia fish farm project in Buguma, headquarters of Asari-Toru Local Government Area.

Other efforts by the government to boost food production in the state are the banana/plantain project in the Ogoni axis and community farm projects with complete value chain process across three local government areas of the state.

“We cannot of course fail to mention the procurement and installation of oil palm processing mills across 16 sites in the state aimed at encouraging the development of oil palm estate farmers who were limited by the non availability of processing facilities”, he said.

He said that farmers in the state were also being linked to the state micro finance agency where the sum of N2billion had been provided as loan for agricultural development.

The commissioner stressed the need for all to join hands to fight food price volatility.

“There is need  for considerable investments in infrastructure, marketing system extension,  communication services, education as well as in research and development in order to increase food supply and improve the  functioning of local agriculture markets”, he said.

The state governor, Rt Hon Chibuike Amaechi represented by the commissioner for Budget/Economic Planning, Mr Charles Gogo Levi said that the theme of the celebration, which is, “Food Prices: From Crisis to Stability”, was a reminder of the importance of making considerable investments in agriculture in order to stabilise the food market, as no nation can be comfortable with price swings in the area. He also said that investments in agriculture were also being carried out simultaneously with investment in infrastructure, communication, education and the environment.

The governor stressed the need for national or regional safety nets for emergency food reserves, and commended the efforts of international donor agencies, the oil exploration companies with bias to agriculture and other captains of industry for their huge investments in the sector.

The event also featured the presentation of cheques to FADAMA cooperative societies in the state. 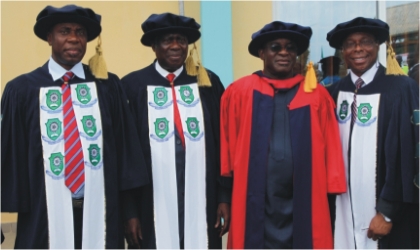 L-R: Rivers State Governor, Rt Hon Chibuike Amaechi, Pro-Chancellor, Rivers State University of Science and Technology (RSUST), Justice Adolphus Karibi-Whyte, Senate President David Mark and Vice Chancellor of the University, Prof. B. B Fakae, after the Senate President was conferred with an honorary doctorate degree at the convocation ceremony of the university in Port Harcourt, Saturday