The Nigerian Senate has  commenced an investigation into the management  of the oil subsidy funds by the Nigerian National Petroleum Corporation, NNPC and  an alleged   overshooting oil subsidy funds from N240 billion as appropriated in the 2011 budget  to N1.5 trillion.

The Senate has also  indicated its readiness to bare its mind over the  proposed removal of fuel subsidy by President Goodluck Jonathan.

These were fall-outs from heated debates on  a motion sponsored by former chairman of Nigeria Governors Forum, and also  presidential aspirant  in the 2011 PDP Presidential primaries, Senator Bukola Saraki and 14 others.

But while the senators were unanimous on the probe, the proposed removal of fuel subsidy by President Goodluck Jonathan has pitched the senators against one another.

Senator Saraki while moving the motion raised an alarm over the outrageous overshooting on the allocations for the oil subsidy funds as contained in the national budget and an alleged  lack of transparency in the operations of the fund by the NNPC and the Ministry of Finance.

“Although, N20billion was set aside for subsidy on a monthly basis in the Appropriation Act 2011, in August 2011, the total figure expended was N165bn of which the NNPC was N88 billion and independent marketers was N77.7 billion.

“In the first three months of the year, both the NNPC and the independent marketers did not exceed N62billion monthly but within the last three months, figures have ranged between N150 billion and N186 billion.

Senators in their contributions on the floor were however divided over the need for the  proposed removal of oil subsidy even as the senate still hopes to look into the issue at a more appropriate time probably after the committees investigation and report on the management of the  said funds.

While some  senators especially those from the South-East and South-South back   the removal  on the ground that the funds had not in any positive way impacted on their constituents some other senators expressed their reservations on the issue as they insisted that the removal would bring untold hardship on the masses as every price of every commodity and service will  be affected at the long run.

According to the  President of the Senate, David Mark  cartels in the oil  and gas industry   are the brains behind the controversies and secrecy surrounding fuel subsidy while he expressed optimism that the  Senate will thoroughly investigate the issues raised.

His words, “my belief is that there is a cartel within the petroleum industry and whatever they do is just exclusive to them. 90 percent of people outside do not know. We must find out how much is spent on subsidy, who are the beneficiaries? Has subsidy benefited us, this are salient points and we cannot run away from them.”

The Senate committees on Petroleum (upstream), Finance and Appropriation were mandated to investigate the allegations and report to the Senate.

The significance of the debate on the motion attracted personalities like the Rivers state Governor Chibuike Amaechi who watched the plenary at the gallery and later had a word with  the sponsor of the motion , Senator Saraki, former Chairman of the Governors’ Forum. 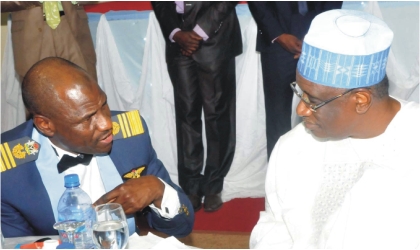 Chief of Air Staff, Air Marshal Mohammed Umar (left) with Minister of Defence, Dr Haliru Bello at a dinner in honour of senior officers of Air Rank in Abuja, Tuesday.