The 38-year-old recipient of the first kidney transplant at the Lagos University Teaching Hospital (LUTH), Mrs Funke Oladeji,  has been discharged from the hospital.

Doctors at LUTH told newsmen that Oladeji had recovered from the successful transplant of July 26, which lasted five hours.

Dr Habeeb Tijani, who led the team of surgeons, said that the transplanted kidney was functioning well.

He added that the patient’s husband, Pastor Wunmi Oladeji, who donated the kidney, had also recovered from the surgery.

“The patient and the donor are doing very well and have been discharged to go home to continue living their normal lives,” Tijani said.

The surgeon said that kidney donation was 100 per cent safe, adding that a donor could live as long as possible with the remaining kidney.

Another member of the team, Dr Oluwatoyin Almira, a consultant nephrologist, confirmed to newsmen that the patient’s kidney function was back to normal, adding that laboratory assessment of her parameters had shown significant improvement.

Almira said that the patient’s blood pressure was well controlled and that she was taken off dialysis following the surgery.

“She is expected to recover fully over the next couple of months and can then return to her normal activities,’’ said another nephrologist on the team, Dr Adebowale Bello.

In an interview with newsmen, Oladeji said that she was diagnosed of kidney failure in November 2009 and was on dialysis in the hospital for almost two years before being operated on three weeks ago.

“I am very grateful to the doctors for all their efforts and also to my husband for donating his kidney,” she said, adding that she was feeling a lot better. 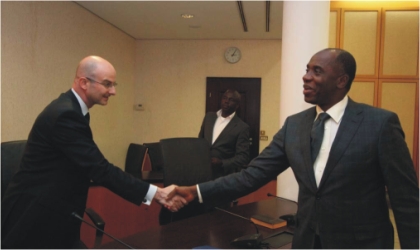