Rivers State Governor, Rt Hon. Chibuike Amaechi has disclosed plans by his administration to acquire two helicopters for aerial surveillance to boost security in the state.

Rt. Hon. Amaechi made the disclosure during a meeting  with professional bodies at Government House,   Port Harcourt, yesterday.

The Governor said though security in the state has improved tremendously since the inception of his administration, the government  is poised to build on the success recorded so far by commencing an aerial surveillance considering the terrain of the state.

He said,  “before April next year, we would acquire two helicopters manned with surveillance cameras to beef up the reconnaissance of the state”.

Governor Amaechi said the measure would further boost security, and most especially curb crimes such as kidnapping which he noted is now at it lowest ebb.

“Before now, I don’t wake up to read the security report of the state. I hear it myself,” Amaechi remarked.

Rt. Hon.Amaechi blamed some of the recent kidnappings recorded in the state on the handiwork of some criminal elements from outside the state, but assured that his administration would make the state unconducive for the hoodlums as it has planned to boost the activities of the Joint Military Taskforce Anti-Kidnapping unit by collaborating with the federal authorities to establish a military barrack at Omuma in Omuma Local Government Area.

The Governor used the forum to intimate the stakeholders of the vision of his administration as he enumerated key projects which his government has completed, and is planning to complete before the end of his tenure.

Rt. Hon Amaechi however urged them not to relent in providing meaningful and constructive ideas that would steer his administration to success,” If I m doing badly I wouldn’t wait for you to upbraid me. I know  what is good and bad, but that does not mean that I know it all”.                     Responding to the governor’s speech, Chairman of the Nigerian Institution of Estate Surveyors(NIESV), Rivers State Chapter, Mr Emmanuel Okas-Wike commended the governor for his foresight and commitment to develop the state.

He urged the governor to always engage the contribution of professionals in policy formulation and implementation as such attitude would create synergy and understanding between the private sector and government. 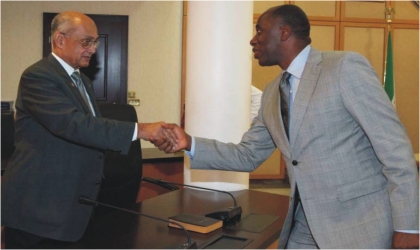