Performing the handover on behalf of the state government and PABOD Supplies Limited last Wednesday, the Permanent Secretary, Rivers State Ministry of Commerce and Industry, Dr Emmanuel Alex-Hart said that the lease agreement was aimed at moving the state to the next stage of global development stride.

Dr Alex-Hart said that the establishment, when fully revitalised, would create job opportunities for the unemployed youths in the state.

According to him, the lease agreement would last for 35 years, after which it would  be reviewed, adding that part of the agreement empowers the ARTEE Industries to demolish and rebuild the PABOD building to a world class standard store.

The Permanent Secretary further said that the ministry has put machineries in place to ensure that the activities of the company conform with the terms and  conditions of the agreement.

Dr Alex-Hart who did not disclose the amount paid by the company for the acquisition of PABOD Supplies, however said that the present administration under the leadership of Rt Hon Chibuike Amaechi was determined to put Rivers State on a fast lane of development.

Also speaking, the Corporate Manager of ARTEE Industries , Mr Gaurav Handa said that the vision of the company is to complement the state government efforts in creating jobs for youths, adding that over 300 persons would be employed as soon as the company comes on stream.

He also disclosed that the SUPABOD building would be demolished and reconstructed in two years into a world class destination for Rivers people. 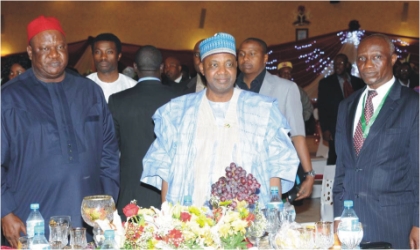 From Left: Secretary to the Government of the Federation, Sen. Anyim Pius Anyim; Vice President Namadi Sambo, and Chairman, Board of Directors, Nigerians in Diaspora Organisation, Mr Ganiya Dada, at a dinner in Abuja on Wednesday.