Former President of Botswana and recipient of the Mo-Ibrahim Prize for African Leadership, Mr Festus Mogae, says Rivers State is  on the path to greatness and lauded Governor Amaechi for providing purposeful leadership to the people.

Speaking as the guest lecturer at the memorial lecture of Late Prof Claude Ake on the topic, “Doom to Boom, Re-engineering the Political Economy of Rivers State For Citizens Prosperity: Lessons from Botswana, Mogae remarked that the long term benefits of the infrastructural development in the state would catapult the state above others.

He, however, pointed out that there must be a shift from oil if the state was bent on leading the path way for Nigeria’s economic recovery.

He emphasised that the natural resources must be used to improve the livelihood of the citizenry and  at the same time secure the future of generations to come.

Mr Mogae while explaining how Botswana’s economy was revived opined that effort must be made to improve the country’s human resource through quality education and healthcare.

Mr Mogae, therefore, charged Governor Amaechi to continue in his development stride since in the long term, the state would be better placed for all.

Chairman of the occasion and Minister for National Planning, Dr Shamsudeen Usman declared that the lecture was timely considering the economic reforms already put in place by the Federal Government.

He congratulated the Rivers State Government for oganising the programme since Late Prof Ake made huge contributions for Nigeria’s development through academic activism.

Dr Usman urged the family of the late professor to take solace on the fact that their father left a legacy that would be most difficult to fill.

Governor Amaechi had hinted that the state government would in future collaborate with the Centre for Advance Social Science (CASS) in the organisation of the lecture,  noting that Prof Ake was  an intellectual collosus that could be only immortalised by deepening democracy in the country. 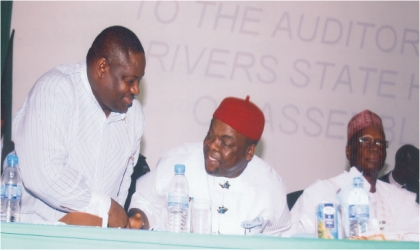 Ogonis Apologise To Amaechi …Endorse Him, Abe For 2011 Polls