The people of Ogoni ethnic nationality have apologised to Rivers State Governor, Rt. Hon. Chibuike Rotimi Amaechi over the embarrassment meted out to him and members of his entourage during the January 4 stone­-throwing incident at the 2011 Ogoni-Day celebration in Bori.

Tendering the apology yesterday at a well-attended church service at the Cathedral Church of All Saints, Bori, the traditional headquarters of the Ogoni people, the Chairman of the Ogoni Supreme Council of Traditional Rulers, King Godwin Gininwa said the incident was most regrettable.

The Monarch, who x-rayed the events leading to the military occupation of Ogoniland and the killing of its prominent sons, said apart from apologising to the governor, there was a compelling need to thank God for prevailing over the situation.

“We could have returned to those days when the innocent will remain in the bush”, King Gininwa recounted, while admonishing politicians from the area to desist from politics of bitterness.

In his speech, Rivers State Governor, Rt. Hon. Chibuike Rotimi Amaechi assured the people of Ogoni that he would implement a development policy that would ensure that council chairmen are no longer irresponsible, if given the mandate to govern for another four year term.

Governor Amaechi, who addressed the people on various key issues, said an all-round PDP government in the state would stimulate growth and enhance focus for the administration.

He assured that the Rivers State Government will fence the property housing the Cathedral Church of All Saints, Bori  stressing that a new model primary school would be built within the church premises.

The governor, who re-stated his commitment to construct the Saakpenwa-Kono Road, also said that he would, in collaboration with Ogoni sons in government, provide funds to assist the church build a better edifice for God in Bori.

The Clergyman, who spoke on the theme, “My Protection Comes From God, assured the people that God would see them through their challenges if they trust in Him,  saying that God would liberate his children from hunger and poverty.

The Bishop, urged the congregation to put their trust in God, saying that  He alone protects”.

Bishop Gberegbara, who took his lesson from the book of Psalm 23, also stressed the need for repentance, saying ‘heaven is real”.

The clergyman also called for the assistance of the state government to check the encroachment on the church while soliciting for support for a new cathedral for the church.

Also endorsed by the people is the former Secretary to the Rivers State Government, Hon Magnus Abe for the Rivers South-East senatorial zone.

The chairman of the Supreme Council of Traditional Rulers of Ogoni, HRM King Godwin Gininwa who said this at a thanksgiving service in Bori, headquarters of Khana Local Government Area, also commended the governor for the infrastructural development of the kingdom.

According to the traditional ruler, a second term for Amaechi would enable him complete all on-going projects in the kingdom.

The council, which also commended Hon Magnus Abe for making the kingdom proud, warned against thuggrey and other acts of violence during the forthcoming elections in Ogoniland.

The royal father thanked the governor for the infrastructural development which touched on improved health centres, education and  roads in Ogoniland.

They also thanked the governor for the restoration of light to Bori and other communities in the area. 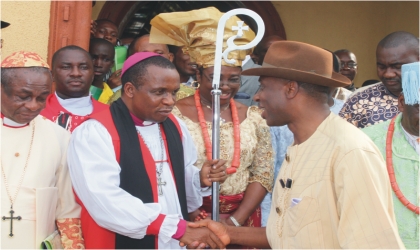